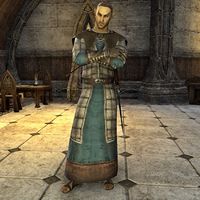 Olquamir is an Altmer member of the Mages Guild and the magister of the hall located in the city of Firsthold. Entering the Guild before having spoken to Sinien, he'll say, "Did Urcelmo send you? It's about time they found someone." Having talked to Sinien, he'll say, "I'm eager to see this plan in action." If spoken to after the siege, he'll say, "High Kinlady Estre is defeated. Thrice-blessed are we. We of the Guild may return to more scholarly matters."

This Online-related article is a stub. You can help by expanding it.
Retrieved from "https://en.uesp.net/w/index.php?title=Online:Olquamir&oldid=1762396"
Categories:
Hidden categories: