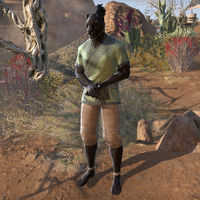 Naraku is a Khajiit who can be found in several settlements around Northern Elsweyr, talking with Elazura.

His conversation with Elazura will vary each time you first encounter them in a town. They will also change as you complete quests in Northern Elsweyr.

Elazura: "So, I recently traveled past Two Moons Temple. I hate to say it, but I think the monks there have gone mad."
Naraku: "What makes you say that?"
Elazura: "They said they were chasing butterflies, but I couldn't see any. They were chasing nothing. It was bizarre and, well, unsettling to see them behave so."
Naraku: "You saw nothing? Odd. You mentioned butterflies … this one has a bad feeling about that. A memory teases … and is gone. Ah well."

Elazura: "I'm hearing troubling rumors about Ashen Scar. Undead, mainly. I guess I can mark visiting there off my list."
Naraku: "Ah, yes. The stories of an undead plague there make this one's fur stand on end. Will we be seeing throngs of undead marching out of there next? Ziss!"
Elazura: "You haven't heard that a necromancer is trying to stop the undead? Hm … I would not be surprised if you haven't. Because why would a necromancer try to stop the undead?"
Naraku: "More likely a necromancer seeks to control the undead, yes, not stop them. This one sees where your doubts spring from, most assuredly. I share them."

Elazura: "Have you heard about the Dragon sightings in Elsweyr? Multiple Dragons? Dark Moons, one Dragon is bad enough!"
Naraku: "More than heard. This one saw a Dragon the other day. This one still shudders at the thought of that experience."
Elazura: "That sounds frightening! A friend of mine claims they came from the Halls of Colossus. Flew out, roaring angrily at everything! I hope this is just a rumor, though."
Naraku: "This one thinks not given what he has heard from others and seen for himself. Nobody should have meddled in those ruins, yes? Now we all suffer."

Elazura: "Gak! Euraxia continually vexes me. And she obviously cares only for Imperials."
Naraku: "This one agrees. Perhaps the Khajiit should leave Elsweyr, but this one feels too attached to this land. And, more importantly, it would gift her with victory. The thought of that pains this one."
Elazura: "Yes, I've heard many in Elsweyr express their anger and frustration over Euraxia's rule. One Alfiq I know said he almost had the opportunity to knock a potted plant on her head, but a guard spotted him."
Naraku: "Dark Moons, this can't continue. Though, this one does find it amusing to think of the Usurper Queen dying at the claws of a single Alfiq armed with gravity and a potted plant."

After you have saved the town of Riverhold.

Naraku: "So, you heard, right? That they killed a Dragon in Riverhold? And … we have a queen! Can you imagine what this means?"
Elazura: "Bright Moons! A better Elsweyr is at hand, yes? Though, it takes a lot of courage to place yourself in opposition to the Usurper Queen. That one must be shaking with rage right now, no?"
Naraku: "The Usurper Queen deserves to be more than shaking in anger. Dark Moons beset her. Fah! May Khamira's boldness see her through to her rightful role as our queen!"
Elazura: "Boldness is an excellent trait to have in a queen. May she win through all that confronts her and go on to see Elsweyr thrive under her leadership."

After you have deposed Euraxia Tharn:

Elazura: "Oooh, my fur ripples in happiness. Euraxia, the horrid usurper, is deposed? There might not be enough moon-sugar in Tamriel to celebrate that."
Naraku: "Indeed! And an outsider stepped in to assist in that, which is a marvel. This one wishes all those involved in this change of circumstance well."
Elazura: "With our new queen, I hope to see great things. Though, of course, it can't happen overnight. I must remember my patience."
Naraku: "Patience does not agree with you on most days, but it is well to see you continue your practice. As for Elsweyr, yes, much work remains, including these Dragons. This one does not envy our new queen."

After you have stopped the undead in the Ashen Scar:

Once the monks of the Two Moons temple are saved:

Elazura: "One of my friends told me that the monks at Two Moons are no longer chasing invisible butterflies. What a relief! I was worried about them."
Naraku: "That is good news indeed! But, do we know what happened there?"
Elazura: "Of course, I asked. You know me. It seems that Sheggorath was driving the monks insane until someone came along to stop him. Gak, Sheggorath, of all things!"
Naraku: "Yes, this one does know you. And this one is happy that the monks are more themselves again. Chasing invisible butterflies? This one should have known it was the Mad Cat."

After you have stopped the Dragons at the Moon Gate:

Elazura: "Why would a Dragon be near the Moon Gate? Do you have any ideas?"
Naraku: "This one would love to have the answer to many questions, and the answer to this question in particular eludes him. This one also does not understand the meaning behind the eclipse."
Elazura: "One of my other friends claims that this Dragon tried to absorb power from the moon. Ziss'vo, I don't like the sound of that. Surely this isn't possible?"
Naraku: "Ah, fear not. That is in the past now. The walker who helped depose Euraxia prevented the Dragon from accomplishing anything. Knowing why all that occurred is what remains for us to puzzle out."

Once the new queen of Anequina is crowned:

Elazura: '"At last! Queen Khamira wears the crown! Ah, I'm proud to be living in such times! Aren't you excited?"
Naraku: "This one is excited, yes, though perhaps not quite as obviously so as you are. As it stands, the challenges she overcame prove that she deserves to lead Elsweyr against the obstacles that remain."
Elazura: "Yes! Exactly! She was brave and bold enough to confront Euraxia and win, plus she stopped the Dragons from gaining whatever power they were seeking. Definitely queen material."
Naraku: "As you say. This one looks forward to seeing what she does next."