Morrowind: Morrowind is on the verge of destruction and only you can save it from a deadly Daedric threat. Discover the secrets of the island of Vvardenfell, and help the Dark Elves stop a meteor from crashing into Vivec City. 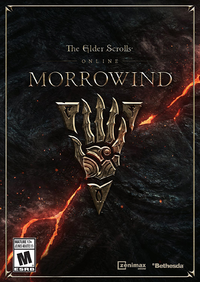 The Morrowind DLC contains the Vvardenfell zone which was originally released in the Morrowind Chapter. It came out a year after the Chapter's release.