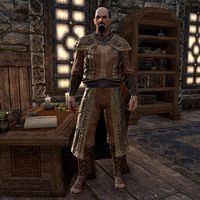 Master Pellingare is a Breton nobleman usually found in Pellingare Manor in Wayrest.

He can be found on the bottom floor over his manor, going over notes on his desk, when spoken to he will say "Beg your pardon! This is a private residence. Where are my guards!" Once Deception in the Dark is completed, he will no longer appear in the manor.

He also takes a walk with two of his guards to the nearby Guard Tower. En route, he'll say out-loud:

Master Pellingare : "Be thankful you two don't have any children. My daughter Allene is distant and aloof, and my son is a sniveling coward. It makes me fearful about the future of the Pellingare family."

If you speak to him, he'll say:

"Quite the view from up here, don't you think?
If only the company was equally enjoyable." 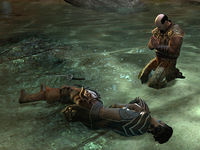 "My poor daughter. Why did you do this?"

Once Allene has been killed, Investigator Lienne will arrive with Pellingare in tow to confront him with truth of what his children have been doing.

Investigator Lienne: "There's your proof, Master Pellingare. It was your children responsible for this madness."
Master Pellingare: "Allene! No!"
"My poor daughter. Why did you do this?"

He can then be spoken with:

"Oh, no. Allene. My girl. My little girl.
Get away from her! Haven't you done enough?"
Why did your children want to attack the city?
"I'll not speak to you, you swine! Murderer! Gall and pox upon your family! Sheor curse you, and all who know you!
I'm not answering anything until I obtain lawful representation!" 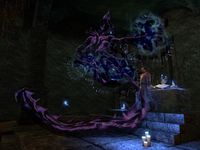 When you reach the Daedric altar, Pellingare will be with a projection of Malubeth the Scourger before running out of the chamber:

Master Pellingare: "Go away! You'll ruin everything!"
Yahyif: "Sir? What's going on?"
"Wait—Master Pellingare! Damn it!"
"He's locked the door!"
"There must be some way to unlock it. Check around the altars."

While helping Yahyif and Gedric Serre look for their employer in the sewers, you will re-encounter him with Garron the Returned:

As the battle with the lich ensues, Master Pellingare will escape but can caught up with in the sewers after Garron is killed:

"You! You're the one who killed my children! You whoreson dog! How dare you show your face here again—I.
Haven't you done enough to my family?"
Yahyif came down here to rescue you. What is going on?
"The situation has … spiraled out of my control.
Nobody was supposed to find us. The lich said he would bring them back. That it would be over and done in a moment. But it's not. Everything's wrong. They … are wrong."
(?)
"My children died. So I made a deal with that lich to bring them back to life. But they came back wrong.
They've been building an army to overrun the city—raising other undead, recruiting necromancers. I thought I could keep them secret."
(?)
"No. You're wrong. My children were law-abiding citizens—paragons of society! Those are monsters who came back in their stead!"
(?)
""I … you are right, of course. I'll help you. They must be … put down before anyone else dies. They're in a cave up ahead where the sewers run out to the sea.
I'll meet you there. Try to draw them out. And when the time comes you … finish it."

You can ask him more questions.

"I told you not to follow me. I didn't want anyone else to die. Why did you have to follow me?"
(?)
"Yes, this is where I found him, already a lich. I had come here, to where my children died, to mourn.
Garron said he tried to protect them from the likes of you. That he was slain in the battle, and was forced to use his necromancy to return."
(?)
"His name in life was Garron. He was a Wayrest Investigator, and a mentor to my children.
He was there for the battle that killed them. Said he could bring them back. All he brought were monsters."
(?)
"(?)"
(?)
"(?)"
(?)

He later goes to the cavern where his children first died. He can be heard beseeching his children to speak with him.

The pair emerge and once the battle starts, their father can be heard saying:

Once his undead children are put down, Master Pellingare will say "They didn't deserve this. Any of it."

If he is spoken to he will say "This is the second time I've lost them."

Gedric Sterre will then arrive on the scene, blaming his employer for Yahyif's death.

Gedric Serre "Pellingare!"
"He's dead, you bastard! Yahyif is dead!"
"Give me one reason why I shouldn't kill you!"
Master Pellingare: "Do what you want. I have nothing left to live for."
Gedric Serre "It's just you and me now." 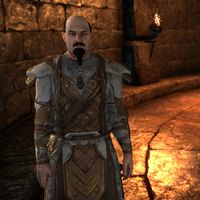 If you decided that Gedric should take justice into his own hands, the following will happen:

Master Pellingare: "I had hoped otherwise, but I suppose it was always going to end this way. For all of us."
Gedric Serre "If only you had realized that before you let your undead children bury half the city down here. If your vanity had allowed you to alert the guards this—
I don't suppose that matters very much to you. Let's get on with this."
Master Pellingare: "Arkay, lord of the seasons, please forgive my children their trespasses, and forgive me mine for refusing to allow their departure from this world."
<Gerric cuts him down with his axe.>
Gedric Serre "It's done. Too late, but it's done."

If you decided that he should face trial:

This Online-related article is a stub. You can help by expanding it.
Retrieved from "https://en.uesp.net/w/index.php?title=Online:Master_Pellingare&oldid=2069337"
Categories:
Hidden categories: