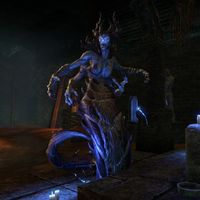 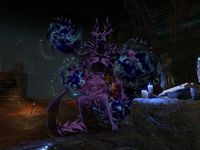 Malubeth the Scourger is a large harvester summoned by Master Pellingare. She serves as the first boss of Wayrest Sewers II.

Her unique drop is Malubeth's Stinger. She is also the namesake of the Scourge Harvester set, but doesn't drop any pieces.

When she is approached, she will shout "You'll not leave here alive." The Journal of Garron is found in front of her.

As a boss type enemy, Malubeth is immune to all forms of crowd control effects.

Initially, Malubeth will be at the central altar. She cannot be attacked until party members activate the two altars at the side.

The boss places magical runes over two random players. This attack does moderate magical damage over time as indicated by two large red circles. This attack persists for a long time, and thus players should kill the boss quickly before the entire floor gets covered.

The boss picks up a random player as indicated by purple beams connecting the boss and player. In this stage, the boss is invulnerable, and the player takes high magical damage over time. Other party members must activate the two altars at the side to free the trapped player.

Malubeth the Scourger is associated with four achievements.