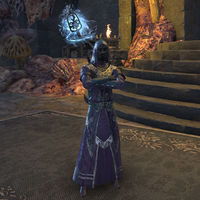 Magister Gothren is a Dunmer magister of House Telvanni, and ruler of Tel Aruhn. He is a strong supporter of slavery.

Make it into Gothren's private chambers and you'll hear the following:

Magister Gothren: "Arith, Giravel, I've had enough of your excuses. Ralasa made your task plain. Find those thieves!"
Arith Sendrul: "I'm sorry, Magister. It will be done."
Magister Gothren: "Whatever it is you want, talk to my cringing assistant."

He'll then retire to another room leaving you to deal with Arith Sendrul.

The Magister Makes a Move[edit]

Your previous foray in Magister's Gothren's domain will have left his previous Mouth, Ralasa dead. The magister will not leave this unanswered and you will soon find that Sun-in-Shadow has been abducted by his servants. When you return to his tower, you need to speak with him and he comment when he sees you:

Magister Gothren: "Eminently predictable, you and your lizard cohort."

When you talk with him, he will immediately blackmail you into working for him:

"Ah, the murderer appears. I should thank you for saving me the trouble of hunting you down. Watching you peasants struggle against the inevitable is exhausting."
Why did you imprison Sun-in-Shadow?
"Don't waste my time with flimsy pretense. Did you really think you could kill my Mouth and get away with it? I see all. Your clumsy intrigue is no exception.
If you wish to save your life and that of your friend, you will perform a task for me."

If you refused to help Sun-in-Shadow assassinate Ralasa and were instead tricked into delivering poisoned cakes, you can protest to no avail:

I didn't know the cakes were poisoned.
"That doesn't absolve you from blame—it just makes you sound stupid. I have no patience for stupidity.
Now I wonder if you're equal to the task I've set for you."

Both branches will lead to the same question:

What do you want me to do?
"Magister Otheri made a discovery some weeks ago—a relic, of some Dwarven device perhaps. He refuses to share the details, so I am compelled to take those details by force.
Steal his notes from Tel Naga and deliver them to my new Mouth, Arith."
And if I refuse?

"Magisters care little for the limits of mortality—me least of all. I try to avoid turning people into shambling masses of screeching tumors, but in this case I could make an exception.
At the very least your scaled friend will die in chains."

"That depends on what information you retrieve. If it's useful, we can discuss the terms of the lizard's freedom.
That's as much of a promise as you'll get from me. Be grateful I am giving you a chance to rectify the wrong you've done me."

Speaking to him afterwards will only make him snort, "I promise retribution and still you dawdle? We have nothing to discuss until you deliver Otheri's notes."

Upon retrieving Otheri's journal and delivering it to Mouth Arith, Gothren will use a channeling spell through him to project himself into the room. 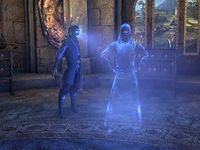 Magister Gothren as a projection

You can then talk to his projection. Magister Gothren will then set you up with another task:

"You retrieved the journal. That was competent."
Arith has it.
"Ah yes, this is Otheri's journal. His penmanship has gotten even worse.
So it's a Dwarven artifact then? A merged tonal prism? My, my, that does sound intriguing. Seems he tucked it away in his kwama mine, Zalkin-Sul. You will fetch it for me."
You said you'd set Sun-in-Shadow free once I brought you the journal.
"I said nothing of the sort. If your work pleases me, I may deign to release your friend and forget your misdeeds. But make no mistake, n'wah—I've given you no word to keep.
Go to Zalkin-Sul, acquire the prism, then bring it to me in Tel Aruhn."
Fine. I'll bring you the prism, then we're even.
"Get me the prism. We have nothing more to discuss."

When you return to him with the prism in hand from the Zalkin-Sul mine:

Magister Gothren: "You didn't get yourself killed. That's promising."

"Ugh. What's that I smell? Grease and kwama dung? Let's make this quick, n'wah. I won't have you soiling my rugs any longer than necessary.
The prism. Do you have it?"
I have it here.
"Well that is a surprise. I do hope this isn't some cheap forgery, for your sake.
Ah. Some kind of merged tonal prism. A lively one too. Fascinating. I do hope that fool Otheri didn't damage it. He's almost as clumsy as you."
All right, enough. We're even. Free Sun-in-Shadow and we'll leave.
"Vehk's head, do you still labor under the delusion that you have some power in this place? Bah—it's hardly worth discussing. I've grown tired of our little chats.
You completed the task I set before you. You can have your lizard back."
Good. Farewell.

Once freed, Sun-in-Shadow decides it is a good time to try and confront Gothren:

Sun-in-Shadow: "I am a free mage of House Telvanni. You had no right to imprison me!"
Magister Gothren: "You presume to lecture me? You who conspired to kill my servant?"
Magister Gothren: "Thank whatever scaly gods you worship that I didn't rend the flesh off your back and feed you to the tower's roots! Cross me again, and your life is forfeit."
Magister Gothren: "We're done here. Begone."

After completing the related quest, you have the opportunity to talk to Master Gothren next time you visit Tel Aruhn. He will, however, not welcome you with warm words but instead grunt, "What are you doing here?"

I thought I would visit under better circumstances than the last time we met.
"Oh, really? More like some other paltry wizard sent you here. Trying to find out my newfound knowledge of kwama mine productivity, are we?
As if I would confide in the likes of you. In fact, why am I even talking to you?"
I was just traveling through the area.
"One other thing, you ignorant n'wah. If I ever find even a whiff of evidence that you or your scaled cohort had anything to do with a recent slave insurgency at Vassamsi Grotto, I will not be merciful.
Now get out."