The UESPWiki – Your source for The Elder Scrolls since 1995
< Elder Scrolls Online: Places: Unzoned / Guildhalls
Jump to: navigation, search 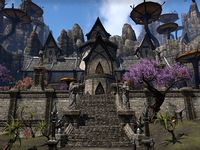 The Eyevea Mages Guild Hall is a guildhall located on the island of Eyevea. It is a two-story Altmer-style building which becomes populated by mages after the successful completion of Mages Guild quest line. It does not belong to any of the Alliances and can be traveled to via portals located in guildhalls in major cities.

In the guildhall you can find portals to Eyevea's districts: Guild Vault, Merchant District and Traveller Falls.

Valaste can be found outside, depending on the choices you made during the related quest. 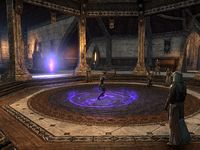 A lecture on magical arts

Several Scholars and Adepts can be encountered in the guildhall, attending Nida's lectures.

During The Mad God's Bargain, you enter a scaled Solo Instance version of the guildhall for your final confrontation with Sheogorath. This instance of the guildhall can only be entered alone.

This Elder Scrolls Online-related article is a stub. You can help by expanding it.
Retrieved from "https://en.uesp.net/w/index.php?title=Online:Mages_Guild_Hall_(Eyevea)&oldid=2473282"
Categories:
Hidden categories: