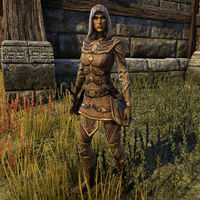 Lliae the Quick is an Altmer bandit hiding out in Chorrol. She is the last living member of the Quickstep Bandits, and seeks revenge on the Black Daggers for their killing of her friends.

"If you've come to join the Quickstep Bandits, you're too late. The Black Daggers killed my whole gang. But they'll pay, if it's the last thing I do!"

After starting a quest, you can ask her questions about her gang and the Black Daggers.

Tell me more about the Black Daggers.
"Well, I hate them and want them to writhe in Oblivion for all time. That enough for you?
They wiped out my gang. They hit us like a ton of manure. One minute, we'd never heard of them, the next they had their weapons sticking into most of us."

Where did they come from?
"Who knows? I don't care much. I heard they're all over Cyrodiil. Once I rebuild the Quickstep Bandits, I'm going to wipe them out, wherever I find them."

So what happened?
"Those cursed Black Daggers happened. Word of our success must have spread across Cyrodiil, and they came to take over. They jumped us and killed everyone but me. I just barely escaped with my life and have been hiding out here ever since."

What's the plan now?
"I'm starting over. I need to gather some funds, then I'll rebuild the Quickstep Bandits. I'll be more careful this time, keep things quieter. We'll jump the Black Daggers as soon as I've got enough folks with me. They're all going to die!"

Death to the Black Daggers![edit]

Why are you lurking back here?
"Just keeping a low profile. Since you found me, want to help me get some revenge?
The Black Dagger bandits in Hackdirt wiped out my gang. Kill ten of them and I'll reward you."
I'll take care of it.
"Trust me, the Black Daggers need to die. They're getting too powerful. No one's safe from them."

After you have thinned the numbers of the Black Daggers:

"How did you do with those Black Daggers?"
They'll need some more recruits.
"Well, that's a start. Maybe my friends will rest more peacefully now. I like the way you work!"

Anything I can do?
"Well, that lava fissure running through town is dangerous. The heat and fumes are bad enough, but flame atronachs are issuing from it, attacking citizens. If you'd kill four of them and thin out the herd, we'd all appreciate it."
How does that help against the Black Daggers?
"Just one less problem I have to deal with. If you take out some atronachs, I can concentrate on planning my revenge against the Black Daggers."
I'll take care of them.
"Even if the rest of the townsfolk don't want to think about it, having atronachs roaming about is bad news."

Once you have clear out some of the nearby atronachs:

"So, not overcome by poisonous fumes or fallen into lava yet?"
I killed some of the flame atronachs.
"Good. Thinning their numbers keeps them under control, as much as anything is under control around here."

Anything I can help with?
"I hope so. An old friend of mine, Captain Minwe, died and was buried near Narsinfel ruins. But someone's raised her, to haunt the ruins. I'd like her to be at rest. You interested in granting her some peace?"
Sure.
"Minwe was my friend and chief competitor when I started my gang. She was mean then and being dead has only made her meaner."

After you put Minwe's spirit to rest:

"So, did you put Minwe down?"
Yes, she's dead again.
"Thanks. We'll see how long she stays down this time. She never seems to stay dead for very long.
I appreciate the effort though!"

How can I help?
"My situation here is precarious. If the Black Daggers find out I'm still alive, they'll come after me, hard. I need supply caches in case I need to run. Want to fill one up for me?"
Sounds easy.
"Once my caches are full, I might spend some time on the road, see what kind of trouble I can get into."

After resupplying the cache:

"Good to see you again. What's the word on my supplies?"'
I dropped them off.
"I appreciate it. Those supply caches are worth more than gold to me. Take this in thanks."

The High Cost of Lying[edit]

You look worried.
"The Black Daggers have set an ambush for me, north of here. I'd like to show them that I still have friends. Feel like triggering a trap?"
Sure, why not?
"The Black Daggers are a cunning bunch. You look like you can handle yourself though."

After you have dealt with the ambush:

"So, did you find them?"
The Black Daggers need to set better ambushes.
"Ha! They'll think twice before trying to ambush me again, thanks to you. Keep whatever you found on their bodies, and take this as well."