The Mages Guild has launched an expedition into Selene's Web to seek out and study an ancient forest spirit rumored to live here. 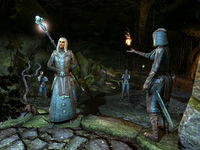 Upon entering Selene's Web, you will find a group of Mages Guild members hanging around the entrance.

Warlock Carindon : "I understand your concerns but think of the potential rewards. These woods have long been rumored to house a powerful forest spirit."
Apprentice Patraud : "There is something off about these Bosmer. Something wild. Feral. Are you sure they just won't attack us?"
Journeyman Mirondil : "I agree with the Apprentice. How are we to get past these Bosmer if they try to stop us?"
Warlock Carindon : "We have visitors it seems. Perhaps they can be of assistance."

You can then speak with Warlock Carindon. He will explain that they are searching for a forest spirit named Selene, and requests that your group offer protection from the local Bosmer tribe in case things go awry. Following this, you will be ordered to accompany Apprentice Patraud in attempting to make contact with the local Bosmer. The hostile Bosmer will quickly kill Patraud and attack.

Speak with Carindon again, who will insist that the group presses on. The next group of Bosmer you encounter will be surrounding a giant spider, which quickly flees, leaving you to fight the Bosmer and their leader, Treethane Kerninn. Continue through the dungeon until you come to Longclaw, a Khajiit who will set his Senche-Tigers on you. After killing them, they will be resurrected as Senche Spirits by Selene, and Longclaw will descend to fight with them. The spirits respawn indefinitely, so it's best to ignore them and focus on defeating Longclaw.

Once you have defeated Longclaw, Journeyman Mirondil will appear from a portal with news. The captured Bosmer gave them information about Selene and Mirondil will wish to join you as you explore further while searching for Selene. Eventually you will reach the entrance to Selene's Sanctum, which is blocked by a magical barrier. The rest of the team will arrive and you will have to talk with Carindon again for further orders. He tells you to looks for an alternate entrance while they focus on the barrier.

You will have to continue on without the mages as they focus on bringing down the barrier. Continue forward, fighting through spiders and hoarvors as well as Bosmer. At the end of the path, a giant bear called Foulhide will be waiting. Selene's Roses will continuously sprout out of the ground as well, although Foulhide's charging attack will help keep them at bay. Once you've defeated the bear, a heavily injured Journeyman Draval will limp up to you and hoarsly ask that you return to the barrier before dying from his injuries.

Backtrack to the barrier, where you will find an injured Warlock Carindon standing alone. The other mages were all killed in an ambush, although they were able to successfully destroy the barrier. You can talk the callous Carindon before agreeing to finish the job. Enter Selene's Sanctum, and fight your way towards the giant web in the center. Fight Selene in her spider form until the web breaks, which will drop you all down into the cavern below. Continue to fight the giant spider until her health reaches zero, Selene will then transform into a Bosmer-like spellcaster. During this stage, her followers will emerge and attack you. Once you have killed her, Carindon will capture her soul and thank you for your help. You will be given Selene's Battle Greaves, a skill point, and gold as a reward.

This Online-related article is a stub. You can help by expanding it.
Retrieved from "https://en.uesp.net/w/index.php?title=Online:Knowledge_Gained&oldid=1990444"
Categories:
Hidden categories: