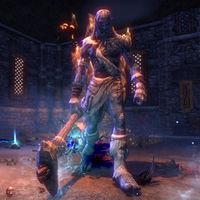 Kjarg the Tuskscraper is a giant who is the "son" of Sister Gohlla of the Icereach Coven. He can be found in the Icereach Underkeep and serves as the first boss for the dungeon.

During his fight, he is supported by Sister Gohlla who summons Frost Atronachs.

While searching for survivors of the Nord forces who were shipwrecked on the island, your progress through the keep will be blocked by the giant and one of the witches. He will be eager to kill you on his mother's behalf.

Sister Gohlla: "More intruders? Marvelous. On your feet, my sweet boy. Smash them for mother, won't you?"

Engaging him in combat:

"I stomp them to pieces!"
"Grakh vahg nool! You die now!"
"Mother want you dead. Have to please mother!"
"Hammer wants blood!"

Once as Kjarg is killed:

Sister Gohlla then teleports away.

This Elder Scrolls Online-related article is a stub. You can help by expanding it.
Retrieved from "https://en.uesp.net/w/index.php?title=Online:Kjarg_the_Tuskscraper&oldid=2147243"
Categories:
Hidden categories: