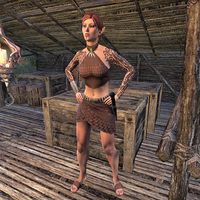 Kirstaleth is a Bosmer originally met in Lilmoth. She has recently joined Cyrodilic Collections and is excited to start her first Murkmire expedition. You'll find her cheerfully whistling a tune near the western gate along with her companions, Zadaza and Varo Hosidias, who are waiting for their expedition leader, Famia Mercius to show up.

The first time you speak to her in Lilmoth, she'll tell you:

"Is this your first treasure hunt, too? I'm so excited!
I scrounged up my fair share of treasures in Valenwood, but root-caverns hardly measure up to a xanmeer! It's sure to be packed with all kinds of treasures. Maybe even some delicious new bugs!"

She can be encountered again with the rest of the expedition, watching as Zadaza tries to unlock the xanmeer's door.

<Famia will approach and use the vakka stones.>

Famia Mercius: "See there? The door awakens! Try opening it now, Zadaza."
Zadaza "Ziss'vo! Zadaza has been picking at this for—! What did you do, Famia?"
Famia Mercius: "Scholarship in action, my friends! Now, let's make some discoveries!"
Varo Hosidias: "Yes, let's get to it. We're crocodile bait out here."

After the expedition group enters the Ixtaxh Xanmeer and gets scattered across the complex, Kristleth can be found trapped on ledge overhanging a deep chasm.

Once a make-shift ladder has been made, Kristaleth can be rescued and the following conversation will happen:

Kirstaleth: "That … was terrifying."
"I heard shouting from across the chasm, It sounded like Varo. He needs help! I just need a moment."
Famia Mercius: "All right, rest here. But not for too long! The crystal's almost in reach! Let's go help Varo."

After you have found Varo and driven off the spiders:

Varo Hosidias: "That all of them? Good."
<Zadaza enters from a door leading to the Stone Furnace.>
Zadaza: "Jone's bumpy arse, what happened in here?"
"The crystal is near! Come!"
Kirstaleth: "Varo! Don't move! I'll get down there to heal you—somehow."

When you have retrieved the crystal and escaped the xanmeer, Kirstaleth will thank you for rescuing her when she is spoken to.

"I can't believe we all nearly died in there. Can you imagine? A child of the Green, choked to death in some dusty stone ruin?
Anyway, I'm alive, and I have you to thank. If you ever need a favor, come find me."

Once Famia has been spoken to, Kirstaleth will converse with the other expedition members and state she no longer wants to go on these sort of expeditions.

Kirstaleth is encountered again as a prisoner of the Blackguards, she and Zadaza were investigating the recent disappearances but were captured themselves. Once you find the prisoners:

Kirstaleth: "It's you! Thank Y'ffre. Please, get us out of here!"

After the gate has been open:

Kirstaleth can be found outside the Cyrodilic Collections building with the other escapees.

"Well, that makes two pits you've pulled me out of. I just don't think I'm cut out for this sort of work.
Maybe I'll open a meadery in Lilmoth. The bees here in Murkmire are, well … huge. But I'm sure I can make do!"