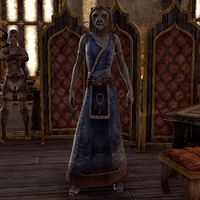 Kazirra is a Khajiit who serves as Clanmother of Arenthia, and leader of a resistance force to retake the city from the Stonefire Cult.

"Bright moons, traveler. I am Kazirra, Clanmother of the Arenthia. Cari tells me we can expect great things out of you. That's good. We'll need all the help we can get."
What's the plan, Clanmother?
"The Colovians are being deceived, and the truth will set us free. Cariel has learned that this attack on the March was prompted by the Stonefire cult! Worm Cultists at the beck and call of Javad Tharn whisper in General Lavinia's ear."
Why will this information set you free?
"The Colovians, for all their flaws. are a faithful people. If they find out their General is in league with a Daedric cult, their resolve will break. But Lavinia herself will never crack. We need to wring a confession out of her second."
Who is her second in command?
"A Centurion named Gavo. He runs the tower district for Lavinia. Gavo keeps a leash on his troops, he follows orders to a fault... and he keeps a tight schedule. Search the district for his plans, and we'll know just where to find him."
I'll figure out just where to find him, Clanmother.
"That part of the city is named for the large tower at the back of the district. Cariel will meet you there once you've found what we're looking for. Go quickly. We have much to do... and we still have the Mane to sort out"
Can you explain a bit more about this plan?
"Certainly. Once you've found the documents Cari is looking for, she'll be able to choose a time and place to strike. You and she will knock him out, bundle him back here... and we'll get him to confess everything to his troops."

How are we going to get him to talk?
"I don't care if we have to parade that Colovian bastard around on a cart. We'll get him to tell the truth. His soldiers will desert at the news that they're under Daedric influence. And we'll get my city back!"

What did you mean, sort out the Mane?
"The Mane, he's here. Some of the quickblades reported seeing him appear in a ball of shadow-stuff, and bending a knee to Lavinia. He's been corrupted somehow. Akkhuz-ri has always been a good and kind man."

I've seen his handiwork firsthand at Fort Grimwatch.
"Then you know of what I speak. I think it's the Stonefire cult. It must be. Lavinia is in league with them, they're behind this Colovian assault. Whatever is affecting Akkhuz-ri, it must stem from their dark magic."

What will you do with him?
"I don't know. I've no idea what's wrong with him. But if he's in league with Daedric worshipers... dark moons. Let's deal with the Colovians, first. We have a plan for them. Then we'll deal with Akkhuz-ri."

Who are all these people?
"Our little resistance. This isn't everyone of course. We have a few more small groups spread throughout the city. But most of our citizens have no formal combat training. And most of the guard died in the fighting"

You really think you'll be able to retake the city?
"Without you and Cari? No. No chance. With her penchant for secret-gathering and your able assistance, I think we just may see this through. So I pray to the bright moons anyway."

Once you have kidnapped Centurion Gavo and returned him to the safehouse, Kazirra will greet you:

"Cari was right about you."
We have him. What do we do with him?
"Originally, we were going to force him out into the street. Make him confess to his soldiers firsthand. You've found us a much more elegant way to see this done. We'll use their own illusions against them."
How will we do that?
"The crystal you found will allow us to imprint whatever we desire onto their projections. We'll get Gavo to confess his connection to the Stonefire cult—and every Colovian in Arenthia will see it firsthand."
What should I do?
"It's only right you have the honor of holding the crystal. I'll interrogate Gavo. And Cariel will be on hand to ensure he … cooperates. Just get the crystal pointed at him when you're ready to begin."
Point the crystal at Gavo. Got it.
"Just point the crystal in his direction. Cariel and I will do the rest."

Use the crystal on the soldier:

Kazirra : "Tell us what you're doing here. Who is behind the attack on Arenthia?"
Centurion Gavo: "We are in league with the Stonefire Cult. The cultists are here! They are hidden behind the walls of the temple district. They're performing a ritual; preparing the way for a dark anchor. They work to the dark orders of Javad Tharn, the necromancer."
Kazirra : "Just what we needed."

"I knew he'd be the weak link we needed. Well done."
How do I imprint his confession on the illusions?
"Take the crystal and head out to where Lavinia is spreading her message of tolerance and understanding. It should imprint the new illusion onto every stand in the city at once. Some kind of magical resonance, I think. I'm no mage."
Then what?
"The Colovians will break. Lavinia's forces will scatter. The perfect time to cut off the snake's head. According to Cariel, the General is using my favorite inn as her own personal manse. Kill her and we'll do the rest."
You're going to retake the city?
"Yes! We'll marshal the resistance when you move out. The next time I pay homage to Jone and Jode, I plan to do so in a free Arenthia. Good luck, traveler. Good luck to us all."
Good luck, Clanmother.
"You'll do good work out there. I feel it in my bones. Once the Colovians are forced to face the truth, they'll scatter to the winds."
What will happen to the Centurion?

"We will ensure he does not warn Lavinia. Don't worry, my friend. He'll be bundled onto a cart and smuggled out of the city. There's no reason to kill him. Gavo has played his part in this tale."

What about those cultists in the temple district?

"I know, Gavo's admission has me rattled too. We have to deal with what is in front of us. And right now we need to end Lavinia's grip on the city. Then we'll take care of the cult."

Dispatch Lavinia and return to the town center:

"You're amazing. We could not have done this without you. Thank you, from the depths of my heart."

If you speak to her after speaking to Cariel, she'll tell you, "The light of the moon will purge the darkness from the heart of Arenthia."

After the events inside the Temple to the Divines, you'll speak to Kazirra:

"You've returned! And the Mane is here, unharmed! Jone and Jode are looking down on us."
He was possessed by a dark spirit, but it seems like he's returned to normal.
"I cannot express how grateful I am. You have saved us, body and soul. May your steps on the two-moons dance bring you where you need to go."

"The people of Arenthia owe you a great debt, traveler. You will always be welcome within the walls of our city. But your tale does not end here, I think."

If this is the first time you have been identified as the Moon Hallowed, you will be given A Door Into Moonlight.

Thank you.
"Everything you've done convinces me … I almost feel silly saying it, but it's all there. The Mane has fallen and you've saved my city. Traveler, I believe you are the Moon Hallowed."
The Moon Hallowed?
"The Mane has fallen and so a new Mane must be chosen. The Moon Hallowed is the one to make that choice. But don't ask me about this. Go to the Moonlit Clearing, north of Senalana. The lunar clergy can answer your questions."
The Moonlit Clearing. I'll head there as soon as I can.
"The people of Arenthia owe you a great debt, traveler. You will always be welcome within the walls of our city. But your tale does not end here, I think."

If you have already completed the objectives at Fort Grimwatch and been named Moon Hallowed by Shazah, you will be given To Rawl'kha.

What do we do now? What about the Mane?
"Yes, Akkhuz-ri. For all he has been through, he is still wise. Travel now to Rawl'kha. I am certain the Mane … I am certain Akkhuz-ri will do the same."
Why Rawl'kha?
"The Temple of the Dance at Rawl'kha is central to the March. It is a place of holy worship in the region, and one where the next steps can be taken. I cannot go. I must remain and see to my city. But I wish you bright moons and sharp claws."
I'll get going, then.
"The people of Arenthia owe you a great debt, traveler. You will always be welcome within the walls of our city. But your tale does not end here, I think."

After the liberation of Arenthia, Kazirra will fill the projection booths with her own image and messages:

Kazirra: "Citizens of Arenthia, bright moons hang above us."
Kazirra: "We have thrown back the Colovian invaders. We have reclaimed our homes."
Kazirra: "Keep your heads held high, for your part in the fight will not be forgotten."
Kazirra: "We rejoin the March, beneath the Eagle's banner! Aldmeri Dominion!"

This Elder Scrolls Online-related article is a stub. You can help by expanding it.
Retrieved from "https://en.uesp.net/w/index.php?title=Online:Kazirra&oldid=2291704"
Categories:
Hidden categories: