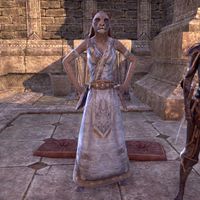 Kauzanabi-jo is a Khajiit moon priestess found inside the temple located in the city of Rawl'kha. She belongs to the Broken Paw, a clerical order of the Lunar Clergy.

"This isn't the place for Khali and Shaza. So close to this corruption when they should be learning of their future roles."

After Naemon is defeated, she'll remark:

"Thank the Eight you returned."

"Kauzanabi-jo was wrong about coming here. Hopefully, the twins have learned much from this visit."

After completing the quest, she'll say:

"This one hopes to see you again. Times are rough with Great War and we could use your help securing the Dominion.
Kauzanabi-jo only seeks to protect and educate the Lunar Champions."

"Bright Moons hang above us, child. What brings you all the way out here?"
Someone told me I might be something called Moon Hallowed?
"Truly? This one thinks you may have been led astray. The Moon Hallowed is a sacred and terrible burden, a role only for one soul in thousands."
Is there any way to find out if I'm Moon Hallowed?
"Well, you have come to the right place for that. Clearing has a special connection to Jone and Jode. If you truly wish to know, if you are prepared, pray here at the altar. Just do not be disappointed if nothing happens."
I'm ready.

If you have completed Grimmer Still, she'll add:

"Ahh, it is you. You stood beside the Champions at Fort Grimwatch and drove off the Dro-m'Athra. This one feels the cool light of the moons flowing from your aura."

If you have completed Stonefire Machinations, she'll add:

"Ahh, it is you. You drove the Colovians out of Arenthia, and freed Akkhuz-ri from the grip of the Dark Mane! This one feels the cool light of the moons flowing from your aura."

Pray at the altar and the first Mane appears:

"A vision of the First Mane himself. Rid-Thar-ri'Datta here, in the Clearing! You are the Moon Hallowed!"
You're sure, then?
"This one is just a humble priest. Who is she to question the judgment of the First Mane? Kauzanabi-jo must congratulate you … and express her regrets. The path of the Hallowed will not be an easy one to walk."

Your next quest depends on your progress through the storyline in Reaper's March:

"You must not linger here, Moon Hallowed. Now that you know your place in the world, you must go to the people of Arenthia. The sons and daughters of Jone and Jode call for your aid."
What's happened in Arenthia?
"The moonlight sings to Kauzanabi-jo. Sings of the darkness inside Mane Akkhuz-ri. He is in league with the Colovians who have taken the city. It is your duty … you must help the people of the city, and do what you can for Akkhuz-ri."
Do you know who I can speak to there?
"An Eye has opened on Arenthia, one of Queen Ayrenn's personal agents. Seek the Wood Elf known as Cariel by the road into the city. And I shall see you again at our appointed hour."
I'll find her.

If you have completed the objectives in Arenthia, you will be given Hallowed To Grimwatch.

If you have completed both Fort Grimwatch and Arenthia, you will be given Hallowed to Rawl'kha.

"You must not linger here, Moon Hallowed. Now that you know your place in the world, you must go to the temple at Rawl'kha. The Bright Moons await the beginning of your journey."
What's happening at Rawl'kha?
"The moonlight sings to Kauzanabi-jo. Sings of the two Champions who will decide our fate. The women from the First Mane's vision. They await you at Rawl'kha. Where this one will perform a ritual of great importance."
I'll see you at the temple, then?
"Yes, My acolyte Hadam-do will greet you outside the temple. I'll see you there, Moon Hallowed. May the Bright Moons light your path."
I'll see you soon.

Speak to her before leaving and she'll only say:

"Go, Hallowed. You know what must be done. Protect the souls of the Khajiit in all that you do."

"Everyone has gathered for the ceremony, and now with your arrival we are ready to begin."
What do I need to do?
"The ceremony begins with the consumption of the moon-sugar elixir. This unique brew will make your mind more receptive to the touch of Jone and Jode."
What then?
"We have prepared the temple for this... unique trial. Never in recorded history have there been two candidates for the position of Mane. You will walk with each Champion, meeting their guides and exploring their past."
Meeting their guides? What does that mean?

"Every candidate that undergoes this ritual is met by a figure from their past. The trial path is meant to cleanse the candidate of doubt and regret. The guide aids in that process."'
And the elixir?
"The moon-sugar elixir is the gateway to the ritual. It allows you to open the doors of your mind, bask in the light of the moons. The touch of Jone and Jode will permeate your senses."

What's the point of this ritual?

"Every Mane walks three paths. The life path is spent growing and loving and learning. The ceremony, here today, begins their trial path. After the cleansing at the temple, each candidate faces a trial unique to the course of their life path."
That's only two paths. What's the final path?
"To prove worthy, a candidate must walk the trial path to its conclusion. Here in the March, that is the temple at Dune. Here Shazah or Khali will walk the final path: The Two Moons Path. We may speak more of that day later, Hallowed."

There's never been two candidates for the Mane at the same time before?

"Never. The Champions were born under a unique alignment of the stars and moons. All the candidates are. But never, in all our history, have twins been born at the exact right time together. Eventually, after all, a decision will have to be made."
A decision? A decision about what?
"There cannot be two Manes. Eventually, a decision will have to be made between Khali and Shazah. And as Moon Hallowed, you will be the one to make that decision."

The conversation ends and the ritual begins.

If you speak to her before speaking to the Champions, she'll say:

After the trials, return to her for more instruction:

"You've done it, Hallowed. The Champions have stepped onto their new path. And all that remains is to conclude the ritual."
What happens now?
"The final step. The Cleansing itself. Please step back, Moon Hallowed."

"Thank you, Hallowed. You've filled your role admirably, as hundreds of Moon Hallowed have done before you. You have the thanks of all who praise the Bright Moons."
You're welcome.
"May Jone and Jode guard your steps, and keep you safe in the trials to come."

"You and the Champions … excuse me, the candidates. You must make for your next challenge. The Moons tell me that your next destination has been revealed to you."
It has?
"Yes. The moons tell me that the spirits of the past spoke of a temple. The holy temple of Moonmont. Its walls once sang of moonlight. And now drip with the corruption of the Dark Mane."
The Dark Mane is there? What do we do?
"Hunt him down, Hallowed. Cleanse the temple, restore the cool light of Jone and Jode. And, always, stand beside the candidates. Shazah and Khali are counting on you."
We'll see it done.

You can ask her more questions after accepting the quest.

"May the Bright Moons light your path, Hallowed. You should know, there is an additional task you could undertake. It might improve your chances at Moonmont."
What is this task?
"In times long past, the Moon Hallowed would often make use of a relic sacred to the Khajiiti people. Today it is just an old lump of metal, a bauble of bygone years. But it could come in useful in the trials ahead."
What is this relic?

"It is called the Golden Claw. Its power and splendor was such that an entire clerical order surrounds it. They have pledged themselves to its safekeeping for many, many years."
Clerical order?
"The Order of the Claw. Just one of the many organizations within the lunar clergy. Kauzanabi-jo belongs to the Broken Paw. We are less martial than many of the clerical orders. We prefer studious contemplation to open-clawed combat."

"At a Monastery known as Do'Krin. It means "Warrior's Grin" in the tongue of my people. Do'Krin lies to the southwest of Rawl'kha, west of the Ayleid ruin called Thormar."

The Mane doesn't require this thing?

"It is as this one said, the use of the relic has fallen out of favor in modern times. But it is still a powerful object. And this is a most unusual trial for our candidates. This one thought you might appreciate every advantage."

"Your sharp claws played no small part in the rise of the new Mane, walker. Be proud of your achievement and know you have the eternal thanks of the Khajiiti people."

This Online-related article is a stub. You can help by expanding it.
Retrieved from "https://en.uesp.net/w/index.php?title=Online:Kauzanabi-jo&oldid=2199933"
Categories:
Hidden categories: