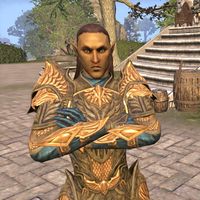 Jurisreeve Soravil is an Altmer revelator-naganwe of the Divine Prosecution investigating murders in Russafeld with his old partner Jurisreeve Lorne. They believe the murders to be the act of the Ghost of the Green, a serial killer who murdered Lorne's husband before being caught. Soravil's wife committed suicide after learning of his death as they were having an affair, causing Lorne and Soravil to drift apart.

As you approach the investigators, you can hear them talking above the victim's body.

If you have not yet talked to Tarnamir, he'll direct you to him.

"Ah, here's one now. By all means, talk to Tarnamir, glan'nt. Apparently we're just recruiting people off the street now.
I'm joking, of course. Please don't talk to Tarnamir. He might actually let you help."

After talking to Tarnamir, he'll be resigned but will accept your help. You can ask him about his partner and your role in the investigation:

"So Tarnamir recruited you, eh? Well, I suppose we'll just have to make the best of it.
Follow our instructions and we'll get along fine. You might even learn a thing or two."
What can you tell me about Lorne?
"There was a time when I could tell you practically everything. We worked together for years, but … well, not every partnership is eternal.
Just know that she's brilliant. The most proficient investigator in Summerset, truth be told."
What's your role here?
"I am a revelator-naganwe—a death seer. I use magic to solve murders. It's one of the essential roles in an investigative quorum.
Of course, magic often falls short. When my fellow revelators and I can't conjure up a suspect, we turn to Lorne."
So Lorne doesn't use magic in her investigations?
"She prefers wit to mysticism. All High Elves possess near-perfect memory, but Lorne puts us all to shame. She can recall tiny details in an instant and finds patterns even quicker.
It's too bad, if you ask me. We all have things we'd rather forget."

"You have your instructions, yes? I can't imagine any of them involve talking to me."

Searching the grape-fields, you come across the body of a young Bosmer woman named Farril. Using the Admanen's Whistle will call the jurisreeves to your spot.

Jurisreeve Soravil: "Another body. Delightful."
Jurisreeve Lorne: "Oh dear, blood on her hands and blouse … but no slashing wounds? This doesn't fit the pattern. The Ghost always kills with a bow. This was spur of the moment … unexpected. Maybe she fought back."
Jurisreeve Soravil: "Why do you insist on puzzling these things over like an ephem? You know the death-memory ritual. It's a simple—."
Jurisreeve Lorne: "Enough, Soravil. You know that's forbidden. Admanen, look around and see if you can find the source of this blood."

If you talk to Soravil before investigating further, he'll reluctantly send you to do your job:

"Go have a look around. I doubt you'll find anything, but there's no harm in trying."

While you and Lorne establish a motive for the murders and reveal that Halimorion was probably making unwanted advances towards Farril, Soravil will go to the cottage of the Bosmer workers' chief. You find him and the chief outside the cottage.

He does stay outside the cottage with chief by the cooking fire. You can talk with him about the old Ghost of the Green and personal past history, Soravil will surprised that she brought the latter with a stranger:

"I suppose I'll stay here to break bread with the chief while you have a look around. Not the way I wanted things to go, but we will simply have to adapt."

Lorne told me about her husband—and your wife.

"Did she? I must admit, I'm surprised. Lorne never talks about that ordeal—certainly not with me, anyway."
Tarnamir said you drifted apart after you caught the first Ghost of the Green.
"My, my, are you an admanen or a confessor?
Tarnamir is quite right. After all that happened, we had a difficult time getting back into a routine. I tried to keep things professional—healthy—but she was just lost. She never fully recovered."
So what brought you back together?
"Tarnamir. When the Ghost of the Green returned, Tarnamir naturally called on the two people best suited to catch him. It was awkward at first, but we've managed. I suppose I have to thank you for that. In part, at least."
Do you still think about what happened?
"Not regularly, no.
We High Elves have acute memories, but I find that if you stay busy enough, you don't have time to reminisce. So much the better."

Lorne mentioned that some aspects of this case remind her of your first encounter with the Ghost.

"Ah yes, I hadn't even thought of that. A corrupt High Elf merchant and an abused Wood Elf girl. There are certainly similarities."
You don't find that suspicious?
"I find everything suspicious.
Whoever this killer is, they've obviously acquainted themselves with the Ghost's history and methods. We kept most of those details secret, but unscrupulous revalators [sic] routinely sell those details to … enthusiasts."
What do you make of this?
"Honestly? I think this is the work of a deranged and obsessive mind. One of these Wood Elves read about the Ghost of the Green, saw an opportunity for cultural glory—for immortality—and seized it.
Even so, Lorne and I have to be sure."

What exactly should I be looking for in the Wood Elf cottage?

"Anything at all that could link this clan—or one of its members—to the murders of Halimorion or Farril. None of these Wood Elves held Halimorion in high regard. We just need to find out if that enmity led to murder."
Do you have any advice for me?
"Operate under the assumption that the killer was here, or still could be. Question everything you see and hear, and look out for any overt or subtle references to the Ghost of the Green."

After you found Celan's journal and evidence identifyin him as the Ghost of the Green, you find Soravil outside, fighting to keep the meal in his stomach:

You can then show him the evidence you found:

"I bought us as much time as I could. I hope you found something useful."
I found this journal. Celan definitely killed Halimorion. Looks like he fled to a nearby shrine.
"A shrine? Hm. There's an old shrine to Y'ffre west of here—the Red Temple. But from what Tarnamir told me, people rarely visit. Filled with wild animals or some such. I only know of one entrance—a cave nearby. Follow me."
All right. I'll follow you to this Red Temple.

After you enter the temple, Soravil will stop by a half-collapsed bridge.

Jurisreeve Soravil: "We should split up. Don't want this little scamp slipping out behind us. I can handle this gap easily. You search the other hall."

When you reach Celan, you will find him being killed by the Ghost of the Green. You can take the Hunting Arrow and look for Soravil. When you find Soravil further in the catacombs, he will appear to have been injured by the Ghost:

"I was too slow. Damned Mer slipped right past me. Tall for a Wood Elf, quick as a spooked hare.
So it really is the chief's son …."
Not exactly. Celan is dead. Killed by another Ghost of the Green.
"Wait, what? What do you mean another Ghost of the Green? The journal you showed me—. Did Celan kill Halimorion or not?"
He killed Halimorion, but only after he was recruited by this other Ghost of the Green.
"What about the Wood Elf girl, Farril? Did he kill her too?"
I don't know. I took the arrow that killed him as evidence. Maybe Lorne can learn something from it.
"Yes, show her the arrow immediately. Perhaps she can compare Celan's blood to the blood on Farril's sickle. At the very least, we'll be able to determine if Celan killed Farril.
I'll be along as soon as I'm able."

If you talk to him again before exiting the catacombs, he'll assure you of his health:

"Don't worry about me. I'll be fine. Go on ahead and speak to Lorne back at the winery.
Besides, someone will have to help the chief recover his son's body."

When you meet with Lorne and enter Tarnamir's house, you'll find the killer has struck again to specifically hurt Lorne. After talking with her, an unpleasant idea about the killer's identity comes to light. Lorne will break her self-made vow and use the death-memory ritual on each body to witness their last moments and confirm the killer—Soravil:

After some struggle he slashes her with the sickle.

Soravil came to Tarnamir as the Ghost, with the aim of killing him to hurt Lorne more:

Soravil will then address Lorne directly:

The Ghost of the Green: "I know you're watching, Lorne. Now that I've broken your spirit, and you've broken your vow, come to the place where my wife is buried. There, I will break your body."

Lorne is shaken, and tells you that after the investigation of the original Ghost of the Green and the death of both of their spouses, she rejected Soravil's advances, after which they grew apart. 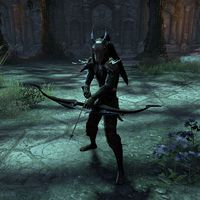 Follow Lorne to the Red Temple to confront Soravil.

He shoots her with an arrow and flees. Pursue him through the catacombs and you find him in the end. Soravil will not go quietly:

Soravil: "Ah, the Ghost of the Green's final victim. Time to die, admanen!"