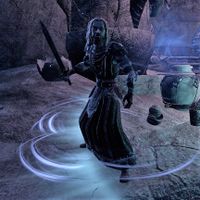 Jakalor is a Nord necromancer controlling the draugr found inside Shroud Hearth Barrow. He has been experimenting on both the living and the dead in an attempt to resurrect his dead wife, resulting in his expulsion from Solitude by Jarl Svargrim, and has been traveling through Nordic tombs throughout Skyrim. Before combat, he is seen trying to raise his dead wife in the temple of the barrow. During combat, he is accompanied by two draugr and will yell "No! I won't let you interrupt my research! I will bring her back!"

This Elder Scrolls Online-related article is a stub. You can help by expanding it.
Retrieved from "https://en.uesp.net/w/index.php?title=Online:Jakalor&oldid=1982738"
Categories:
Hidden categories: