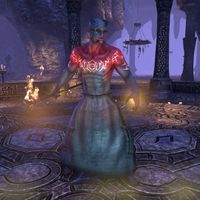 Ilambris-Zaven in Crypt of Hearts I

Ilambris-Zaven is a Xivilai fire mage found in the Crypt of Hearts I. Together with his twin Ilambris-Athor, he was summoned by Nerien'eth to torture Alanwe and keep the shards of her soul from reuniting. He is one of the final bosses of this dungeon, and killing him and his brother dispels their magic, allowing Alanwe to reform, completing the dungeon. 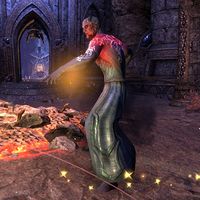 Ilambriz-Zaven in Crypt of Hearts II

Ilambris-Zaven and Athor reappear in Crypt of Hearts II at a suspected ritual site. Early into the fight, they merge together to become the Ilambris Amalgam. 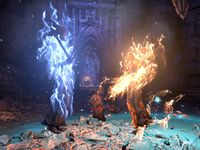 The Ilambris Twins merge into the Amalgam

They will say a variety of things:

Ilambris-Athor: "You again! We serve the Whisperer now, but we'll crush you just the same."
Ilambris-Zaven: "Have they come looking for the Blade, brother? How mortal of them."

Ilambris-Athor: "Have you come to claim the Blade, mortal?"
Ilambris-Zaven: "The lich will not give it up willingly."

After attacking both of them, they will reveal they have a final trick up their sleeves:

Ilambris-Athor: "The mortals think they've won."
Ilambris-Zaven: "Let's show them how wrong they are, brother."

They will then become the Ilambris Amalgam.

This Online-related article is a stub. You can help by expanding it.
Retrieved from "https://en.uesp.net/w/index.php?title=Online:Ilambris-Zaven&oldid=2086463"
Categories:
Hidden categories: