The UESPWiki – Your source for The Elder Scrolls since 1995
< Elder Scrolls Online: Places: Eastmarch / Crypts / Delves
Jump to: navigation, search

The Icehammers were a famous clan of warriors who fought long and well during the reign of Hoag Merkiller—so well that King Hoag made the head of the clan one of his thanes. But the clan fell on evil times thereafter, and the Icehammer name died out in the last quarter of the First Era. 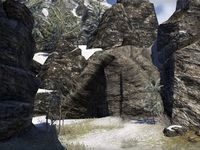 Icehammer's Vault is a ruin in eastern Eastmarch, north of Cragwallow containing Draugr. In addition to being occupied by draugr, undead wolves called Draugulfs can be found in the crypt. A letter from Uggissar to his cousin can be found not far from the entrance. Farther in lies a book about Thane Icehammer. In the northwestern room there is a torn book shedding some more light into the fate of Uggissar and his family who had been hiding in the tomb. In the northern tunnel you can find another note from Uggissar. 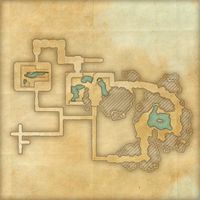 A map of Icehammer's Vault

This Elder Scrolls Online-related article is a stub. You can help by expanding it.
Retrieved from "https://en.uesp.net/w/index.php?title=Online:Icehammer%27s_Vault&oldid=2195302"
Categories:
Hidden categories: