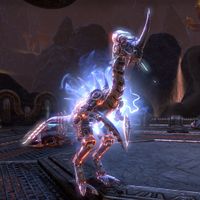 Hunter-Killer Positrox is a verminous fabricant who, together with Hunter-Killer Negatrix, acts as the first boss of the Halls of Fabrication. If both Fabricants are close to each other, they form a link which strengthens them,[verification needed] but also is the only way to dispel the damage shield on the Refabricated Arquebuses that spawn during the fight. It is advised that one tank keeps one of the Fabricants in the middle of the room, while the other tank kites the second one around, creating the link to destroy any Arquebus that spawns. They will also cause a debuff which drains more health the longer it is active, and should be dispelled as soon as possible.

Once they are killed, a chest spawns at the front of the room they are in. The Pinnacle Factotum appears from the planar rift shortly afterwards.

This Online-related article is a stub. You can help by expanding it.
Retrieved from "https://en.uesp.net/w/index.php?title=Online:Hunter-Killer_Positrox&oldid=2081845"
Categories:
Hidden categories: