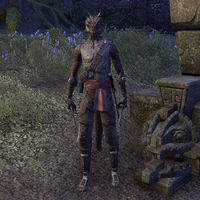 Heem-Jas is an Argonian fisherman found inside the Ruins of Mazzatun. He is a member of the Su-Zahleel tribe, and the only one who was not kidnapped when the rest of the tribe was captured by the hostile Xit-Xaht. Heem-Jas aims to rescue his fellow tribe members. Even though he has a lot of pluck, his actual skills leave something to be desired.

Heem-Jas can be found at the entrance of the Mazzatun Ruins, where he is preparing himself to go on a "rampage".

"Greetings, friend. Do you mean to enter the ruins? I should warn you, you will be wading into a river of blood. I am here to go on a bold and ferocious rampage."
A rampage?
"Yes. A rampage. Then a heroic rescue. Do not try to talk me out of it. I have spent my entire hatched-life preparing for this.
If you want to come along, I will not stop you. Just know that Tree-Minder Na-Kesh and her brood will show us no mercy."
Wait—a rescue? What happened?
"Tree-Minder Na-Kesh and the Xit-Xaht people raided my village while I was out fishing and kidnapped my entire tribe. They mean to put them to work building this ugly city. I mean to save them.
It will not be easy, but I am very plucky."
It sounds like you might need a hand. I'll help you rescue your family.

Upon accepting to help Heem-Jas, you can ask some additional questions about him and situation.

"I welcome you help. There is enough glory and adventure for everyone.
Just keep your fins drawn tight. If you draw the Xit-Xaht's attention, I can strike from the shadows and help guide my tribe to safety. In heroic fashion, of course."
What is this place exactly?
"The people call it Mazzatun. The Puzzle City. The Xit-Xaht tribe has lived here for centuries—since before the creeks turned to rivers. And in all that time, they have never stopped building. They build, and build, and build. It is a sickness."

What kind of sickness?
"Heart-sickness. Their Hist-tree, the Tsono-Xuhil, is crazy. Obsessed. Most Hist tell the Saxhleel to cast their rocks into the pond and build with reed and mud. This Hist doesn't."

Why?
"Like I said, it is crazy. It could be root-weevils, or bad water. Or maybe it has just lived too long. My uncle lived to be one hundred and he died thinking he was a marsh-hen.
All I know is that it makes its children build stone houses. Forever."

And they take slaves to help?
"Yes. But not for much longer. We will see to that, right?"

What's your story? / So, whats your story?
"I am an adventurer, like you. Or I will be. Do not let my humble appearance fool you. I am very canny—and I wield a fish hook and knife better than any of my tribesmen."

Is this your first adventure?
"No, of course not. I live on the chopping edge of danger and excitement. I have written all my adventures down if you wish to read them. There was the Great Shell Caper, and the Outrageous Eel Escape. They all have excellent names like that."

This might be more dangerous than you think.
"No, it is exactly as dangerous as I think. But I cannot let that prevent me from rescuing my friends and clutch-mates. If I could face the Bone-Trout of Drash and survive, I can make it through the Puzzle City."

Do you know what we'll be up against in there?
"I imagine that we will face many, many Xit-Xaht warriors. Beyond that, it is hard to say.
Mazzatun is a mystery to almost everyone. I have heard stories about gigantic monsters, and strange Hist sap rituals, but they could all be fish tales."

Do the Xit-Xaht have a leader?
"Other than the mad Hist tree? Yes. Their Tree-Minder is a mage called Na-Kesh. I am told she is a cunning alchemist, with a golden tongue and scales as thick as oak bark. If we want to stop the Xit-Xaht for good, we will have to slay her."

While fighting through Mazzatun and rescuing his tribe, Heem-Jas will often have things to say. After rescuing some villagers:

Heem-Jas: "Drop your picks, friends. It is time to leave this place. Quickly, follow me."
Su-Zahleel Captive: "Heem-Jas? How did you—? Nevermind. Zatzu the Spine-Breaker...she's taken the others deeper into the ruins."
Heem-Jas: "Keep moving. I will guide this lot to the exit, then we can send Zatzu to the Root-place."
<Heem-Jas leads the escapees out.>

After Zatsu is killed, Heem-Jas will come back and tell his friends that they are free.

Heem-Jas: "I arrive too late. Kaoc. I guided the first group back to the swamp. You are free, friends. Flee this place."
Su-Zahleel Captive: "Heem-Jas? Is that you?"
Heem-Jas: "Yes! I am here to rescue you. You sound surprised...."
Su-Zahleel Captive: "No! Well, yes—a little."
Heem-Jas: "You should head back to the village. My companions and I will free the rest of the tribe."
<The freed villagers flee>
Heem-Jas: "Pay no attention to them. They are still in shock, I think. I will run ahead to scout out these ruins. I will try to leave a few Xit-Xaht alive so you can share in the glory."

Further into the ruins, Heem-Jas can be found getting beaten up by a Stoneshaper.

Once the enemies have been killed, Heem-Jas will get up and see if the captives are okay.

Heem-Jas: "Dreet, Jaseen, we are...here to rescue you."
Su-Zahleel Captive: "It is Meema and Bun-Ti ... are you all right? That was a savage beating."
Heem-Jas: "All according to plan. Now, the four of you should swim to safer waters. My companions and I will find the rest of the tribe."
Su-Zahleel Captive: "Yes, we will make for the marsh. But keep your bellies to the mud. They've woken up Mighty Chudan!"
Heem-Jas: "Mighty Chudan? It is nothing we cannot handle, right? Ha—ow."

You can speak with him here.

"It looks much worse than it is, I am sure."
Who is Mighty Chudan?
"Not who—what. A giant haj mota by the sounds of it. There are stories about Na-Kesh using tonics to grow monsters but …. Just be careful. Even baby haj mota are dangerous.
I will rush in to help as soon as I am able."
So, getting beaten up was part of the plan?
"Yes."
Really?
"No. I tried to sneak behind one of the Xit-Xaht—catch him unaware. It turns out that I am very, very loud."
So what now?
"I will put my arm back in its socket. I should have done it while my clutch-mates were still here. Putting your own arm back into its socket is a very brawny and impressive thing to do. Anyway, you should keep going."

Once Chudan is killed, Heem-Jas will run in late yet again.

Heem-Jas: "I am here! You draw its attention while I ... oh. Well, good job. I guess."
Tree-Minder Na-Kesh: "Muck-dwellers! What have you done?"
Heem-Jas: "It is Na-Kesh! We have killed your pet. Release the rest of the Su-Zahleel tribe, or suffer the same fate! That was good, right?"
Tree-Minder Na-Kesh: "No. No, I think not. Xal-Nur prepares your elders for sacrifice even as we speak. Their blood will water the roots. As will yours."
<Na-Kesh leaves>
Heem-Jas: "A sacrifice? There may still be time to save them. If the stories are true, Xal-Nur is slow and stupid ... but also strong as a graht oak. We must move quickly."

You can ask him about Xal-Nur.

"(?)"
Who is this Xal-Nur?
"I have never seen him. People say he is fifty-hands tall, with spines as sharp as Mehrunes' Razor. This is probably exaggeration though. He cannot be more than thirty-hands … forty at the most."
That's still pretty tall.
""Tall" is just a matter of perspective, right? Well … no I guess it is not. Thirty hands is enormous. Do not worry about it. I am certain he is very stupid and clumsy. Killing him will be a roll in the mud for warriors such as we."
Tell me about these elders./Tell me about these Elders.
"They are the wisest members of the tribe. They carry the Root-Talk, and know all the sacred croaks and Chukka-sei naming secrets. Losing them would be like having our hearts cut out. We cannot let Na-Kesh claim them for the Xit-Xaht."

After searching through the ruins for Xal-Nur, Heem-Jas can be found in large room which the site of an impending ambush.

Heem-Jas: "Ah, you made it. I have searched high and low but I cannot find any sign of Xal-Nur or the elders. It is also very, very quiet."
Heem-Jas: "That either means the Xit-Xaht have fled, or they have gathered in great numbers to kill us all. I hope it is the second. I am filled with sap and fury."
Xit-Xaht Warrior: "Now! Kill them!"
<Heem-Jas is knocked out.>

Once the ambush has been defeated Heem-Jas will regain his senses.

Heem-Jas: "Another glorious victory. I just need a moment to gather my wits. And throw up. Keep looking for Xal-Nur. I will ... be right behind you."

When approaching Xal-Nur, some Su-Zahleel will rush up to the group.

Su-Zahleel Captive: "Friends! Our foolish cousin freed us but that beast, Xal-Nur, caught him. You must hurry!"

Enter the Stone Stockade, where you will find Xal-Nur and Heem-Jas.

After Xal-Hur is killed, Heem-Jas thanks the group for the rescue but insists it was all part of a plan.

Heem-Jas: "I had him by the short spines. I know it did not look like it, but feigning panic is a excellent way to set an opponent off guard. Anyway...thank you."
"Keep moving. We are near to finding the Tree-Minder and the elders, I know it."

Once the elders have been found:

When spoken to Heem-Jas will say:

"I am right behind you, friend. Na-Kesh will die at our hands. Try not to strike a killing blow before I arrive, all right?"'

After Tree-Minder Na-Kesh is killed, Heem-Jas rushes in to help but is late, yet again.

Heem-Jas: "It is time to make the witch pay. You attack from the right! I will ..."
Heem-Jas: "Late again ... I erect the spine of deep disappointment."
Heem-Jas: "So, this is the Mad Hist. By the egg .... Do you see how it weeps and twists its roots? I hope the elders can help."

Heem-Jas must be spoken to in order to complete Sap and Stone:

"It appears that our adventure is at an end. I will admit, it did not go exactly as planned. But all true adventures include some deep bruises and frantic screaming, right?
I am right, aren't I?"
Sure. What now?
"There is still the matter of the Hist. The elders may be able to put it to sleep but that mud is too deep for me.
The important thing is that our rampage was a success, right? Na-Kesh is dealt with and my egg-kin are free. Well done, friend."

Once the Hist has been calmed, Heem-Jas can be spoken to for a final farewell.

"Again, you have my thanks. Hopefully we will meet again—preferably in a dark and terrifying cave. Full of scary fish. I am much better at fighting fish. Trust me."