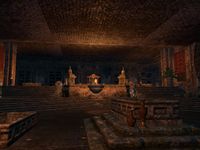 The Halls of the Highmane is a Khajiiti ruin housing the trials of the Pride of Alkosh. The entrance to the Halls lies beyond a trap door in front of The Forgotten Mane, south of Khenarthi's Breath Temple.

Path of the Winged Goddess[edit]

Path of the Winged Goddess 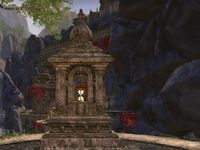 After walking down a short passage, you will find yourself on the Path of the Winged Goddess, the first trial which is dedicated to Khenarthi. It is situated a deep chasm with waterfalls and no immediate way across, the trial tests your wits and grappling bow know-how. You must reach the Shrine of Khenarthi so your companion can access the Chasm Bypass which is a shortcut through the trial area. Once on the other side of the chasm, you can enter the doors to the second trial.

The plaque By Gentle Winds is found on the platform immediately west of the entrance is accessible with the grappling bow.

Path of the Moon Prince[edit] 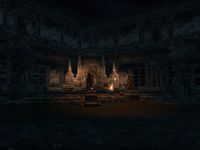 Path of the Moon Prince

The Path of the Moon Prince is a large, darkened hall split into four sections and dedicated to Lorkhaj. The second trial tests balance between the Forgotten Mane's will and the Darkness within their heart. To pass, you must light braziers and face the dro-m'Athra which emerge from the portals and the Dark Spirits (Being, Power, Spirit of Darkness and Strength) that follow. Once all four of the braziers are lit and guardians defeated, the door will unlocked and you can continue on.

The plaque which describes the test, Through Doom and Darkness can be found at the feet of the brazier at the center of the room. 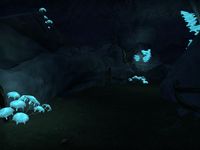 The inner halls are a set of halls and cave passages between the second and third trials. When you enter the inner halls you will find that it is not unguarded, mummified Highmane Guardians (Mystics, Maulers, Archers, Warriors and Stalwarts) will be roaming the halls. In the eastern wall there will be hole which leads to cave passage lit by luminous blue mushrooms. At the end of these halls is the entrance to the Path of Pride which is a zone on its own. 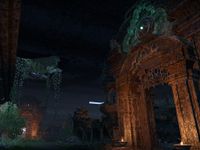 After climbing some stairs, you will reach the Path of Mending which is the third trial dedicated to Alkosh and his Tapestry of Time. Below the platform is maze with gates and Sliding Stones. It also has Grapple Points which can be used to move around the puzzle room. To solve the puzzle, the blocks will need to be moved to their panels to open gates and ultimately the door. At some point you will need to move an already used sliding stone to another panel, the Stone Reconstruction ability can be used at any of the blocks' starting points to recall the block there.

Once you have solved the puzzle you can continue to the Hall of Guardians. 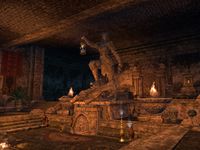 This room is the final resting place of Ja'darri the Endless, the founder of the Pride of Alkosh and former bearer of the Mask of Alkosh. A plaque can be found on her statue, when read during the related quest, her spirit will be momentarily summoned. The door to the Walk of Ancient Kings and the Mask will then be unlocked. 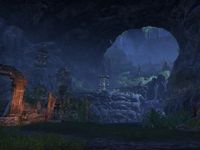 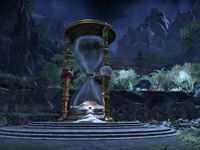 The Mask of Alkosh's reliquary

When entered, the passage will open up into a large open-air cavern with a giant hourglass visible. This place is the where the Mask of Alkosh can be found, however when you arrive you will not be alone. The dragon priest Ra'khajin and his master Laatvulon will have already beaten you there. You will need to defeat Ra'khajin so you can claim the mask from the broken hourglass. Before Laatvulon can intervene, Nahfahlaar will arrive and the two dragons will soar off to do battle.

A side door to the northwest will lead back into Southern Elsweyr.