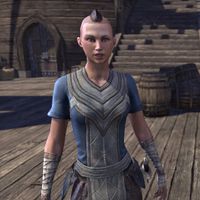 First Mate Elvira Derre is a Breton sailor and the first mate of Captain Albert Marck. 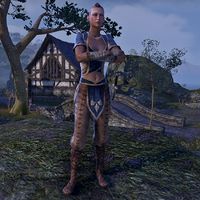 Elvira can be found hiding just outside Steelheart Moorings, where she is looking for assistance in rescuing her fellow crew-members. she will run up to you to say "Here comes that stroke of luck I was counting on."

"Ha! I was starting to doubt Captain's story, and you come sauntering up like some hero from the stories. It's perfect.
That nasty slaving outfit you embarrassed at the lighthouse—they took over this village, and they've got the rest of our crew."
You want help freeing your friends?
"We're their only hope, but I have a simple plan, fun too.
The Dark Elves outnumber us by a little—actually, a lot. So first, you should create a diversion by setting fire to their tents and the stolen goods on the dock."
Makes sense. Then what?
"Well, my sailors are locked up in a cave behind the town, but the slavers' leader, Ma'jhad Kha, keeps the key in a house he's commandeered.
So you'll need to steal the key first, then go down and free the guys. I guess it's not that simple, is it?"
I can handle it.

Once the player has agreed to help her, she can be asked further questions.

"Well, the last thing I want is or you to go running in there unprepared. Might end up getting jumped by Ma'jhad Kha and get locked up with everyone else.
The main thing is just to light the fires though. Is that what you wanted to ask about?"
How do I light the fires?

"Improvise. Pull a burning log from their campfire.
Then light'em up—the tents, and all those stolen goods out there on the dock. Hopefully, that'll distract Ma'jhad Kha."

Tell me more about Ma'jhad Kha.

"You're not thinking about taking him on, are you?
That's one crazy Khajiit. He was actually a slave himself but turned on his masters and took over. Killed his competition and became some kind of slaver king.
Trust me. Light the fire. Distract him."

Speak to her again before leaving and she'll say:

"As soon as I saw you, I had a good feeling.
We can do this. We just have to watch out for the slavers' leader, Ma'jhad Kha. Avoid him at all costs. The fires should keep him busy though.
If you got questions, ask. Otherwise, good luck."
I do have questions.
<Repeats from "Well, the last thing I want…" above.>

After defeating Ma'jhad Kha you can release her from her bonds:

First Mate Elvira Derre:"And I said this would be fun. Let's get out of here, Come on!"

Elvira will take off down the beach. Catch up with her and she can be spoken to.

"That almost wasn't as fun as I expected it to be. Thanks for coming after me."
I wouldn't abandon you.
"Regardless, I owe you one.
That was something wasn't it? The fires, the slavers running everywhere, getting all the guys free … quite an adventure. Hope to see you again, friend."

Once Divert and Deliver is completed she can be spoken to again.

"Now that we got the crew out safely, next order of business is to get back to sea.
I'm betting we'll have better luck finding a ship in Wayrest than back in that little village."

She can found at the small western docks and can be asked about the location of her captain.

"If you're here to join the crew, today's not the day. The ship's still anchored out in the harbor. I'd write down your name, but I just don't feel like it.
Too much to drink last night at the Cloudy Dregs …."
I'm looking for Captain Marck
"Sorry, friend. He just headed back up to the Cloudy Dregs to speak with the money lender, S'rashi.
If I know the captain, he may be having a drink downstairs before he goes up."

If you try to speak to her before finding the captain, she'll only say:

"Like I said, if you need to talk to the captain, you'll have to catch him up at the Cloudy Dregs."

During Favor for the Queen she is still at Northsalt Village and has a lot more to say.

"Hey there. You the one Queen Maraya bought passage for to Sentinel? All right.
I'm just glad you didn't bring along a chest full of luggage. We got to row out to the Posset in this little dinghy here. Real glamorous, eh?"
I'm sure it will suffice.
"As long as you don't mind rowing. Captain Marck already let me do all the rowing on the way in. Such a gentleman. Yeah. I wouldn't expect any rowing from him.
We're ready whenever you are. Just sat the word and we'll push off."
I'm ready to go to Sentinel.

"Then let's get the Oblivion out of here.
Come on, Captain. It's your turn to row!"

How have you guys been doing since we last met?

"Well, the captain's convinced we still haven't shaken that string of bad luck that started back in Stormhaven.
That's a load of dung though. We got a new crew and a new ship, the Dawn Posset. What more does he want? Beats the Oblivion out of me."
He hasn't racked up any more debt with S'rashi, has he?

"I don't know. He came into a pretty good-sized of coin not long after we saw you in Wayrest. Bought all kinds of cargo with it—legitimate cargo—things he's hoping to sell at other ports.
We haven't sold anything yet, though."

Once deciding to go to Sentinel:

First Mate Elvira Derre: "All right you lubbers. Time to cast off!"

After arriving in Sentinel and finding the Docks swarming with undead.

"Well, we're here all right, but I'm not sure I'm going to be getting off the boat. In fact, I say just put right back out to sea."
Is something wrong here?
"You be your arse there is. Queen Maraya's messenger said she had heard rumors, and I guess they were true … or something.
Go talk to Captain Marck. He actually walked a little ways down the dock. Better he tells you about it himself."

Both before and after the The Debt Collector's Debts quest, she'll say:

"Walk softly, please. I had one too many last night at the Cloudy Dregs.
You tromping across the deck sounds like someone hammering a two-handed mace against the side of my head."

After you completed Divert and Deliver, she will say:

"I knew I'd find you here!
We're still raising funds for our next voyage, but it's only a matter of time. If you ever decide you want to set out to sea, let me know! We could use a heroic crewman like you!"

Elvira will be waiting at the Northsalt Village docks in Rivenspire, alongside her captain waiting for his "luck to change".

"Good day to be out on the sea, isn't it? So why am I standing around here of the docks you might ask …? That's good damn question.
Ask Captain Marck."

After telling Elvira you're ready to head to Sentinel, you'll arrive at the Sentinel Docks. Shazeem, Irien, and Elvira will be pensively looking at the pier where Captain Marck and Neramo are in a protective magic bubble. Speaking to her after completing Favor for the Queen:

"If you decide you want to leave, talk to the captain. I can't think of any reason at all for us to stay here.
I can deal with thieves, pirates, and all manner of vagabonds, but I'm not getting near any undead."

If you approach her without having done any of the quests from the previous zones, she says:

"Good day to be out on the sea, isn't it? So why am I standing around here on the docks you might ask …? That's good [sic] damn question.
Ask Captain Marck."

This Elder Scrolls Online-related article is a stub. You can help by expanding it.
Retrieved from "https://en.uesp.net/w/index.php?title=Online:First_Mate_Elvira_Derre&oldid=2520304"
Categories:
Hidden categories: