The UESPWiki – Your source for The Elder Scrolls since 1995
< Elder Scrolls Online: Places: Alik'r Desert / Guildhalls
Jump to: navigation, search 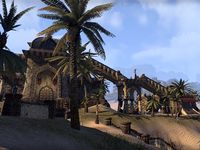 This Fighters Guild is the Sentinel branch of the Fighters Guild. It is a large, two-story Redguard-style building with several outdoor areas used for training and storage. Inside, the central part of the ground floor is used as a dining area. It contains three long tables, served with fresh vegetables, food and drinks. On the right-hand side is a training area equipped with weapon stands and dummies. In the training area, several guild members are honing their combat skills under Nazila's supervision. Master Kasan can be encountered here. There can be an advanced safebox under the stairs. The upper floor is an area for study and rest, with two bookshelves, a sofa and a table, and several kegs. There are a number of weapon stands on both floors that can contain leveled weapons and shields, all of which are owned.

A door on the upper floor provides an access to the outdoor area, where several members patrol the premises. A long set of staircases connects the roof of the guildhall with Jofnir's Quarters. Underneath the stairs, a place for submitting crafting writs is set up. Two camels, Valentique, Anaka the Ink-Blooded and a dog named Barkeep are located here.

* This person can be encountered here only during the related quest.

The Council appears here only during Proving the Deed.