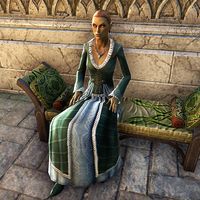 Felawen is an Altmer who can be found in Lillandril. You can find her in the northwest section of town, sitting on a terrace bench not far from the Fighters Guild hall.

Prior to starting the quest, she'll only say:

"I'm not in the mood for conversation. Go chat up another stranger."

After you've found and read Nafarion's note, she'll instead reply with:

"Pardon me, but I'd rather be left alone right now. I'm dealing with a rather personal loss, and not in the mood for conversation."
I found this note and pendant near Nafarion's corpse. He wished for you to have them.
"Corpse? Nafarion is … dead?
This note. By the Stars, I can barely believe what it says. He was the one who killed Mother. Because he had turned into a …. Who else have you told about this?"
You're the only one.
"Excellent. And by your own admission, he's dead. I honestly can't think of a better conclusion to this whole affair. I'll just say he was kidnapped or some such.
Here's a reward, both for delivering the letter and keeping this matter … discreet."

This will complete the quest, but she'll continue the conversation:

"Thank you for understanding. Hopefully I can put this whole affair behind me soon."
You seem rather happy that Nafarion died.
"Is it so strange to feel relief at such an outcome?
You read Nafarion's letter. He wanted his … affliction to be kept a secret. He knew the repercussions this would have on our families."
So you're pleased he's dead.
"Honestly, I'm sure he is too. Better to die in honor than live in disgrace.
And I do mourn his loss. He was an excellent candidate for marriage. It could take decades before I'm matched with another betrothed."
That sounds rather cold.
"An ephem such as yourself would never understand. My family's name, Nafarion's family's name … that's all that matters. Nothing else."
An ephem? What's that?
"Someone who's not a High Elf, of course.
If you're going to live within Summerset, I strongly suggest you learn our vocabulary. It's the least you visitors can do."

If the player is an Altmer:

That sounds rather cold.
"As a fellow High Elf, I expected you to understand. My family's name, Nafarion's family's name... that's all that matters. Nothing else."

She'll repeat this conversation each time you speak to her from here on out.