This article is about the Jester on Auridon. For the bard in Daggerfall, see Falarel. 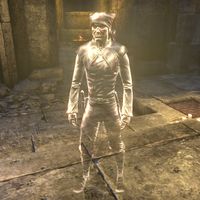 Falarel the Jester is a mad Altmer spirit found in the ruins of Castle Rilis. He is the former jester of High Kinlord Rilis XII known for his sadistic 'jokes'. He moved to the ruins after the death of his former master, where he began receiving 'nocturnal visits' from his ghost. He died in an accident as he wanted to show the ghost to Telenger the Artificer and Flaccus Terentius.

During the related quest, he has to be defeated to be able to unite the also decesased Lisondor with his soul. As you attack him, he'll say, "Why aren't you laughing? Don't you get the joke? My death is my masterpiece."