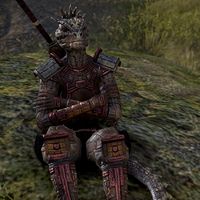 Eyes-of-Steel is an Argonian officer of the Ebonheart Pact found at Jorunn's Stand. She is supposed to represent the Argonians at the Great Moot, which was scheduled to happen at the summit of Skuldafn. However, those plans were delayed by Fildgor Orcthane's recent interferences.

Eyes-of-Steel can be found on a rock overhang right in the middle of the camp (just to the northwest of the map icon). She appears to be relaxing with a couple of books and an empty bottle next to her.

A version of Eyes-of-Steel is also fought during the Circus of Cheerful Slaughter alongside Jorunn and General Noramil.

At the meeting with Rigurt in Windhelm:

Rigurt the Brash: "Welcome to the bustling city of Windhelm for King Jorunn's amazing Corn-un-licker celebration. We greet the ambassadors of the glorious Dark Elf and Argonian nations with stinky arms and open fish."
Rigurt the Brash: "Let Rigurt be the first to welcome... one moment please. Let me check my notes... Ambassador Flies-of-Steel and Ambassador Normal! Ha!"
General Yeveth Noramil: "How amusing! King Jorunn sent his court jester to receive us. Bravo! Bravo I say!"
Eyes-Of-Steel: "What an... interesting form of greeting. I may never truly learn to understand the dry skins. Perhaps we should head to the inn, Yeveth?"
General Yeveth Noramil: "Yes. Cracking suggestion. Perhaps they'll have something other than... what's that awful Nord beverage... ah, yes. Mead."

"It's always good to see you, brave one."
Prince Irnskar asked me to speak to you.

"War approaches like a storm on the wind and the Prince needs our help. Why should I trust him or his champion? Perhaps some discourse will show me the measure of Irnskar's advocate.
Does war make a person stronger?"

You have two choices here. You can either answer her questions or intimidate her.

If you choose to intimidate her:

[Intimidate]If you won't work with the Prince, just say so.
"So impatient! I won't waste any more of your precious time. Actions speak louder than words, anyway.
Challenge Hald Bitterblade. He's the Stormfist commander. Find him on the east hill and bring me his head as proof of your victory."

That depends on whether the war is won or lost.
"An obvious answer. Another question.
Which serves best in time of war—a strong will or a strong body?"

A weak soldier can't swing a sword or draw a bow.

"Even the strongest soldier breaks at the first sign of trouble if his will is weak. Strength serves no purpose without the conviction to back it up. One more question.
Why should I trust Prince Irnskar now?"
The Prince made a mistake. I believe he learned from the experience.

"Actions speak louder than words and the Argonians need reassurance.
If the Stormfist Commander, Hald Bitterblade, were to, say, lose his head, that would send a useful message to the Orcthane's troops."
I'll bring you Bitterblade's head.

Without courage or commitment, a soldier is useless.

"A thoughtful response. I do worry that Prince Irnskar's insular thinking is dangerous and goes against the edicts that formed the Pact."
The Prince has learned from his mistakes. He nearly lost his father.

"An interesting outlook. Learn by losing.
I think the Stormfist Commander, Hald Bitterblade, might learn by losing something, as well. His head, for example. At least his troops would learn a lesson—to fear the Ebonheart Pact."
I'll bring you Bitterblade's head.

You can ask her more about the task.

"Do you desire another philosophical discussion?"
Where can I find Bitterblade?
"The traitorous Nord from the Stormfist clan watches his troops from above. He's arrogant and vain, or so I hear.
Go out the east gate, just up the path, but be careful. The area is thick with the Orcthane's soldiers."

Returning to her with the head:

"Ah, the brave and mysterious champion returns. Do you have something for me?"
I defeated the Stormfist commander.
"And I see that you brought me his head. Bitterblade was a worthy foe and your efforts on behalf of Prince Irnskar have improved my opinion of him considerably.
I shall confer with the Prince and offer my counsel as needed."

"The promise of battle holds no fear for me."

Speaking to her before the council:

"I shall attend the Prince's council. Perhaps I'll see you there."

Thane Oda Wolf-Sister: "Fildgor's at Skuldafn with the Crown of Freydis and the body of Queen Nurnhilde. For what purpose?"
Prince Irnskar: "The Orcthane plans to use them at the dragonshrine to usurp my father's throne."
General Yeveth Noramil: "A necromantic ritual, perhaps?"
Eyes-of-Steel: "The Crown is a powerful artifact. I shudder to think what the Orcthane can accomplish with it."
Thane Harvald: "I don't like the idea of that bastard using our fabled crown. And I hate that he has our beloved queen's body."
Prince Irnskar: "Father! You honor us! I'm glad to see you up and around."
Jorunn the Skald-King: "My brother seeks to pull my sister's soul from Sovngarde. The Crown of Freydis will see the soul, not the man."
General Yeveth Noramil: "It's good to see you well, Jorunn. We've been discussing how to approach Skuldafn."
Thane Jeggi Gap-Tooth: "Yes, yes. We discuss and we strategize while Fildgor digs in and strengthens his defenses."
Thane Oda Wolf-Sister: "So, have we come to any conclusions?"
Eyes-of-Steel: "The Stormfists have fortified the primary path to the dragonshrine. A frontal assault would take time that we may not have."
Jorunn the Skald-King: "Time is a luxury we don't possess. If Fildgor completes this ritual, all is lost."
General Yeveth Noramil: "That's why you wanted to see those scouting reports! You think there's another way into Skuldafn."
Jorunn the Skald-King: "There is always another way. Champion, may we speak?"

Speaking with her after the quest:

"Hello, friend. I understand you continue to assist the Ebonheart Pact."

Eyes-of-Steel appears at the Great Moot atop Skuldafn after Fildgor's fate has been decided. She is the Argonians' voice in the sealing of the Ebonheart Pact, and presents the Mnemic Egg to symbolically grant the wisdom and memories of the Hist to the Ebonheart Pact.

Jorunn the Skald-King: "Esteemed allies. I stand before my ancestors, at this holy dragonshrine, to seal our pact for the greater good."
Eyes-of-Steel: "I stand on this mountain to proclaim how far the Argonians have come from the swamps of Black Marsh. In the name of my people, I add my voice to form this Ebonheart Pact."
General Yeveth Noramil: "I represent the Dunmer and the Tribunal. I stand on this frigid rock to affirm our place in the Ebonheart Pact. I fervently hope we can move this along, because it's freezing up here."
Jorunn the Skald-King: "The Nords offer the Crown of Freydis. This symbol of power and wisdom provides the Pact with the strength and authority of our Nord ancestors."
General Yeveth Noramil: "The Dunmer offer the Judgement of Veloth, an artifact of ancient magic. This provides the Pact with our skills and the blessing of the Tribunal."
Eyes-of-Steel: "The Argonians offer the Mnemic Egg, sacred symbol of birth and life, thus granting our wisdom and memories of the Hist to the Pact. With these offerings, the Pact is sealed. Let our nations become one."
General Yeveth Noramil: "Further, the Dunmer call for a single leader to hold this pact together. We believe Skald-King Jorunn is the one to lead us. We believe Skald-King Jorunn is the one to lead us!"
Jorunn the Skald-King: "Let our enemies tremble at our combined might. I accept the role of High King of the Ebonheart Pact. We have much to discuss here. Please, Champion, return to Jorunn's Stand and tell my son what has transpired."

Speaking with her after the Great Moot:

"The Pact is sealed! Long live the Ebonheart Pact!"