The UESPWiki – Your source for The Elder Scrolls since 1995
< Elder Scrolls Online: Places: Bangkorai / Outlaws Refuges
Jump to: navigation, search

The outlaws refuge beneath Evermore is the place where members of the Bjoulsae Boys gang of northern Bangkorai can meet and do business with the followers of the Red Asp of Hallin's Stand, as well as the occasional Iliac Bay buccaneer. 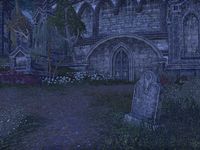 Evermore Outlaws Refuge is an outlaws refuge hidden beneath Evermore. 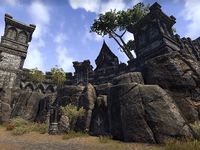 Second entrance outside the city

One of the entrances is located near the Stormhaven bridge, behind the southwestern city wall. Another door can be found in the graveyard to the north of the city, not far from the Evermore Wayshrine.

A journal, which describes the aftermath of Khorshina's participation in the war for Cyrodiil, can be read at her booth. A letter, For the Doyen, Sleek Splendid-Paws, from Lithyyorion to "the Khajiit crime lord", according to him, lies near Lithyyorion's bedroll.

The refuge is frequently utilized by the members of the Bjoulsae Boys for the meetings with the followers of the Red Asp of Hallin's Stand. 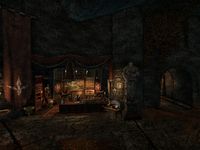 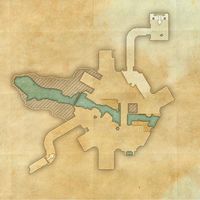 A map of Evermore Outlaws Refuge

This Elder Scrolls Online-related article is a stub. You can help by expanding it.
Retrieved from "https://en.uesp.net/w/index.php?title=Online:Evermore_Outlaws_Refuge&oldid=2094257"
Categories:
Hidden categories: