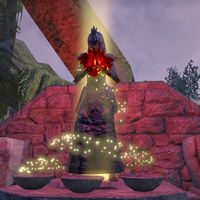 Empowered Tree-Minder Totem is a glowing spectre that takes the place of one of the statues on the edge of the arena after Tree-Minder Na-Kesh douses one player with Amber Plasm.

The Tree-Minder targets one player and causes them to hallucinate, making the statues on the edge of the arena glow and the affected player's vision to go wonky. The affected player will see Avatars of the Hist, and must be guided to destroy the totem. While targeted, you must find the Empowered Tree-Minder Totem and destroy it. Your allies can activate a synergy to reveal the real avatar on normal, but on veteran hardmode, you need to communicate to find it. A good strategy without using voice communications is for the tank to run over to the real one, which will be glowing for those with normal vision.

Amber Rain
When a player is hallucinating, sap will fall from the Hist above. Large AoEs will spread on the ground and then explode with sap that applies a DoT if stood in. This should be avoided by any means possible. You may need to roll dodge out.