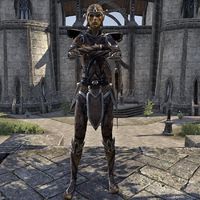 Elendarie is an Altmer soldier of the Aldmeri Dominion found in the city of Firsthold after saving the city during the quest Sever All Ties.

She'll thank you with, "Auri-El watches over you. You have my thanks for your victory here today." After you complete the quest by talking to the queen, she'll say instead, "Our people owe you a debt of gratitude. With High Kinlady Estre defeated, Queen Ayrenn and High Kinlord Rilis may continue to unite the Aldmeri Dominion."

Elendarie can be found later near the Hectahame, accompanying Queen Ayrenn during the quest Striking at the Heart where she'll tell you, "Auri-El watch over you. The queen, the mane, and Indaenir have all chosen to put their faith in you. I hope they are right." After the events, she'll add: "You've proven yourself a valuable member of the Aldmeri Dominion." Once Queen Ayrenn announces Indaenir at the new Silvenar, she'll add, "Don't mistake the queen's strength for callousness. She knows what's needed of her, as a leader."

After completing the quest, she'll say:

"I hope our paths cross again under better circumstances."

This Online-related article is a stub. You can help by expanding it.
Retrieved from "https://en.uesp.net/w/index.php?title=Online:Elendarie&oldid=2082854"
Categories:
Hidden categories: