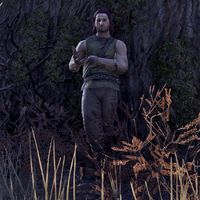 Edweg is a Breton and a retired knight of Arkay found near the Sanguine Barrows.

When you find the former Knight of Arkay, he can be found leaning against a tree and wearing casual clothing. You can ask him if he found the relic or not.

"It's nice out here. No more crawling around crypts, no more undead. No more really heavy armor. No more preaching about Arkay. Nope. No more. I'm done."
Are you Edweg, a servant of Arkay?
"That Edweg is gone. I am no longer in the service of Arkay. Maybe I'll be Edweg the Traveler. Or maybe Edweg, Safe at Home.
I bet you were sent to find me. Or at least the relic I was supposed to retrieve. Saint Marben's Fingerbone."
Do you have the relic?
"Near as I could find out, it's buried up at the top of these barrows. But when I saw the trolls and felt the cold of the barrows on my skin, I said no more.
I've resigned. You can get the relic and pass along my resignation to Alvaren."

You will then receive Edweg's Resignation Note and will need to dig up a finger bone at the barrows.