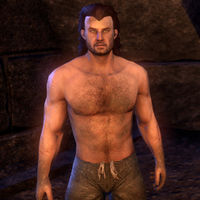 Edjar is a Nord werewolf found just northeast of Dusktown. He is an escapee from Exarch Tzinghalis' tower and his experiments. Edjar worked with Fennorian in the expectation that the vampire would help free the rest of his pack. When Fennorian appears to have gone missing from his lodgings, Edjar is your only lead.

If you come across his small camp beforehand searching for Fennorian:

"I don't know you. I don't want to know you. Get lost." [verification needed — does Edjar exist in game before quest]

After receiving a message from Fennorian, you and Lyris Titanborn will go to Dusktown, only to find his lodgings ransacked. Searching the building for clues brings up a burnt note which mentions a meeting with Edjar on the outskirts of town. As you approach his location, Edjar will come out of hiding and demand you leave.

Edjar: "Sod off. This is my patch of ground."

Talk with him and see what he knows about Fennorian.

"You don't listen too well, do you?
All right. Talk fast and tell me why I shouldn't rip out your throat."
I'm looking for Fennorian. His notes said he was working with you.
"The silk-shirt kept notes? Of course he did! And where is Fennorian? He's late and he still hasn't compensated me for the information I gave him. I need that key!"
Fenn's gone missing. Tell me what the two of you were doing so I can find him.
"Missing? Probably taken by the same bastard that has my pack mates. Exarch Tzinghalis.
Fennorian said he could provide a key to unlock their chains if I told him about the experiments performed on us. If you can get that key, I'll tell you more."
You mean this Dwarven key?
"Hircine's fetid breath, that's it! Look, I managed to escape from Tzinghalis's tower, but my pack mates are still chained up in the Lightless Hollow.
Use that key to set them free, then I'll tell you how to find Fennorian."
All right, I'll free your pack mates.

As he begins to give directions, Lyris will arrive.

Edjar: "The Lightless Hollow lies to the east and—Hircine's claws! Who is that tall woman?"
Lyris Titanborn: "Stand down. I'm a friend."

You have the option of talking to him before Lyris.

"My pack mates are in a work camp on the Lightless Hollow's west side. That's the big cavern to the east. You need that key to unlock the special chains that bind them.
I'll meet you south of the work camp after you set them free."
Pack mates. That's an interesting turn of phrase.

"What else would you call them? My family? We're bound by a curse that makes us closer than any blood relatives. You find a pack and you stick together. Or you die. Simple as that.
I'm not leaving them in the hands of that insane exarch."
Curse? What kind of pack are we talking about?

"We're werewolves, all right? Do I have to spell it out for you?
Look, Tzinghalis captured us. Keeps us prisoner with chains of Dwarven design. Only that key can set my pack free. I was lucky, but that kind of luck doesn't happen a second time."
So how did you get free?

"Tzinghalis's helper made a mistake. Forgot to lock the chains when I was brought back after one of my … treatments.
I can still feel the fire from when the needle pierced my skin. My blood, flowing into his vials and beakers. It wasn't pleasant."

What were you and Fenn doing before he disappeared? (This option advances quest stage)

"Fennorian really wanted to figure out what Tzinghalis was doing to my pack.
He studied my wounds, took some fluids, and went back to get that key. He never told me where he found it. Just that he'd set my pack free if I told him everything I know."
And you think you can tell me where to find Fennorian?

"He's probably in Tzinghalis's experimentation chamber. I clawed my way out of there. It nearly killed me.
I can tell you how to get inside, but you have to free my pack mates first. Do that for me, and I'll help you find Fennorian."

"Exarch Tzinghalis. He's a vampire, part of a group called the Gray Host. They're military, but he's some sort of insane genius. An alchemist, a scholar, and he tinkers with machines.
My pack wouldn't fight for them, so they found other uses for us."
What other uses?

"Digging. Tunneling, actually. Up, toward the surface. Then, every so often, Tzinghalis would send for one of us.
The mad vampire likes needles. He would either take our blood or inject something into us. Never said why, but he enjoyed his work."

Speaking with him after talking to Lyris, Edjar will remind you of your deal.

"Remember, the Lightless Hollow is the large cavern to the east. My pack is imprisoned in a work camp on the western side.
I'll work my way over there and meet you south of the camp—after my pack mates are set free."

When you have you rescued his packmates Breyfridde, Thevin, Harmild and Merthida, you can find them with Edjar and Lyris to the south of the camps.

Edjar: "Head to the surface. I need to fulfill my end of our bargain." 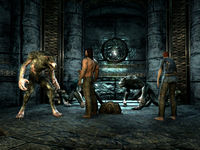 Edjar and his pack, reunited

He will be amazed that you succeeded. Edjar will then explain what he knows about entering the tower.

"You actually did it. You freed my pack. Now it's my turn.
If Exarch Tzinghalis took Fennorian, and I'm pretty sure he did, you'll find them both in the ruined Dwarven tower. It's difficult to get inside if you're not a vampire, but I know a way."
Tell me how to get into the ruined Dwarven tower.
"Like I said, Tzinghalis's helper made a mistake. Forgot to fasten my chains after one of my tortures. I slipped away, crawled along some pipes, and fell into a chamber with one of those Dwarven lifts.
There was also a door, the one behind me."
And that door will get us to wherever Exarch Tzinghalis is holding Fenn?
"It'll get you close. There's a big door that leads into Tzinghalis's lair, but it's sealed. You need to figure out a Dwarven mechanism to open it.
Then make your way to the experimentation chamber. That's probably where he's keeping Fennorian."
All right, Edjar. Thank you for your help.

After speaking with him he'll head through the door to his pack.

Edjar: "The door's over here. Hurry, before they spot us."

He will the go over to his assembled pack in the dwarven lift and take it to the surface.