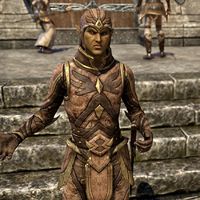 Earos is an Altmer soldier of the Aldmeri Dominion found in the city of Firsthold.

"Firsthold is off limits. You're going to want to get yourself back to the main road."

"We've got a little situation here, but we have things under control. If you're looking to make a difference, we could use some reinforcements. Would you carry word to Skywatch?"

What should I do once I get to Skywatch?

"Find Captain Tendil. Let him know we could use some reinforcements for the perimeter here, and then do whatever he asks. We're going to be fine here. I know it."

I'll speak to him.

If you talk to him again before turning the quest in, he'll say, "Get going, friend. Tendil will get you situated. And we could use a few more hands for the wall." If you return to him after completing the quest, he'll thank you, "You did it! The whole line speaks of your service. The bodies we've got out here will make sure the Daedra stay bottled up in Firsthold. Thank you."

"Halt! Firsthold is no longer safe. We'll need you to make your way back to the main road."
I can help. I work with Razum-dar.
"You've worked with the Eyes? Auri-El provides.
Daedra run rampant, portals to Oblivion have opened within the city, and an army from the Deadlands threatens to take Firsthold."
Who leads the army?
"I can hardly believe it, but reports indicate High Kinlady Estre is behind this. We hold the line here, but that could change at any moment.
Battlereeve Urcelmo sent a runner requesting aid. He has a plan to deal with these beasts, apparently."
I'll find the Battlereeve at once.

You can continue to ask him questions:

"Eight watch over you. You'll find Urcelmo at the Mages Guild. Just follow the path behind me up and around. You'll find him no problem."
How did Estre do this?

"High Kinlord Rilis didn't know of her treachery when he let her into the city. And that was it.
We lost touch with Rilis after the gates to the Deadlands opened. I hope he's still alive."
The Deadlands?
"Mehrunes Dagon's plane of Oblivion. It's a wasteland. Nothing but stone, lava, and Daedra. When the gates first opened, I had a good look.
And smell. Mara's heart that place has an odor."

"He's here. He piled in right behind the Battlereeve. Said something about supporting the Marines and the guilds.
You know how he is."
Do you know what Urcelmo is planning?
"Estre dropped a barrier around the inner castle. We'll need a way past it, to get at the portals. I think the Battlereeve and the guild leader plan to crack that thing like an egg. The frontal approach."

This Online-related article is a stub. You can help by expanding it.
Retrieved from "https://en.uesp.net/w/index.php?title=Online:Earos&oldid=2080873"
Categories:
Hidden categories: