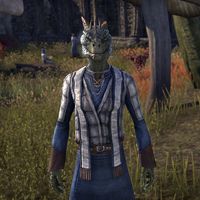 Drifts-On-Wind is an Argonian mage who was invited to study at the Shad Astula Academy. Initially, he can be encountered at the docks in Mournhold, awaiting to be transported to the school. He cannot be spoken to at this point.

Upon arrival at Shad Astula, he can be found near the eastern pond, accompanied by Thole Falas.

Drifts-On-Wind has taken a fancy to Blazing-Glory, but he cannot sum up the courage to approach her. If spoken to, he sounds indecisive.

"Maybe I should go talk to her instead of sending illusions. Nah, that's a horrible idea. I'd probably throw up or something."

This Elder Scrolls Online-related article is a stub. You can help by expanding it.
Retrieved from "https://en.uesp.net/w/index.php?title=Online:Drifts-On-Wind&oldid=1978139"
Categories:
Hidden categories: