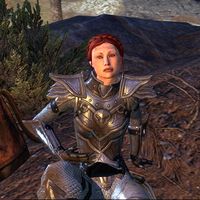 Dirdre is a Breton member of the Silver Dawn who can be found at Argent Mine.

As you approach the injured woman, you can overhear her vow, "The Silver Dawn is lost, but I swear to make the pack pay."

If you talk to her, she will caution you about entering the mine.

"Careful, friend, Argent Mine has been overrun. I barely made it out alive."
What happened to you?
"Murder and mayhem, that's what happened here.
It was the Magnar Pack. They attacked us, decimated the Silver Dawn. I think I'm the last of the order left alive. The pack needs to pay for this outrage. I want them all dead!"
Silver Dawn? Magnar Pack? I'm not familiar with these terms.
"The Silver Dawn is a sacred order of werewolf hunters. The Magnar Pack are werewolves.
They attacked our stronghold in the Argent Mine. I barely escaped, but I had to leave our sacred banner behind. Without it, the order can't rise again."
I can recover the Silver Dawn's sacred banner for you.

After agreeing to find the banner, you can ask Dirdre about it, as well as further questions.

"If you really plan to recover our banner, you must be on your guard in the mine.
Not only are the werewolves cunning and fast, but the order placed traps throughout the mine to protect it."
Tell me more about the sacred banner.
"Our founder, Adeliza Silver-Axe, crafted the banner to honor her beloved son, who was turned into a werewolf.
Forced to kill him, she weaved her tears and blood into the banner. And each commander since has added a drop of blood to the sacred flag."
A banner woven with blood?

"It's done as part of a ritual. They fast for three days and meditate before the banner. They see visions. Of Adeliza Silver-Axe. She made it our sacred duty to rid the world of the curse of werewolves.
I am honored to be part of the order."

What will you do with the banner if I find it?

"I will find other members of our order, if they still survive. If not, I will recruit new members. Either way, we will rebuild. The banner will serve to rally us.
I won't let Magnar and his mangy beasts win the day. I simply won't allow it."

Did you say your order set traps in the mine?

"We had precious little warning that the pack was coming, but it was enough. We set up traps to slow or even kill the invaders. Rock falls, spikes, bear traps, that sort of thing.
Tread carefully in there."

"You're back! Tell me, were you able to recover our sacred banner?"
I recovered your sacred banner.
"By the Eight! You have given me a sliver of hope on a very dark day. The Order of the Silver Dawn will rebuild and continue the mission given to us by Adeliza Silver-Axe so many years ago.
Thank you for all you have done!"

If you talk to her after completing the quest:

"The Order of the Silver Dawn will survive. We will one day rid the world of these murderous werewolves.
On this, you have my word."
How will you rebuild the Order of the Silver Dawn?
"First things first. I'll wait to see if any members of the order return from missions. Then we'll establish a new base of operations and rally new members to our sacred banner.
The Order of the Silver Dawn will survive. The world needs us."
Will you try to recover the Argent Mine?
"We must select a new leader. After that, it will be up to that person to decide how best we should proceed.
Adeliza founded our order in this place. But now that the werewolves have discovered it, perhaps it would be best to just leave it to them."