The UESPWiki – Your source for The Elder Scrolls since 1995
< Elder Scrolls Online: Mounts: Cervines / D
Jump to: navigation, search

This article is about the mount. For the creature, see Dawnwood Indrik (creature).

These magical creatures have a special relationship to Y'ffre the nature god, and seem to draw strength from the very bones of the earth beneath their hooves. It's a privilege for a mortal rider to be borne by such an enchanted beast. 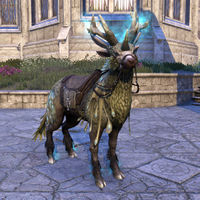 The last time all four Dawnwood berries were available was during the New Life Festival 2019 event.