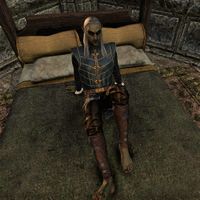 Dathus Ildram is a Dark Elf who can be found at the castle in Kvatch.

He has made some powerful enemies and is a target for the Morag Tong. According to Naryu Virian "he swindled some rather important clients and had the audacity to steal from House Hlaalu itself. The last straw was when he closed two orphanages to open a cornerclub."

After you've opened the secret passage, Naryu will get to work: