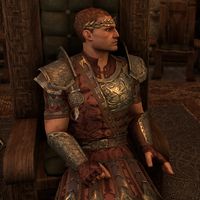 Count Carolus Aquilarios, also known as the Wolf of Kvatch, is the current Count of Kvatch and nephew of Varen Aquilarios. He's served the city and defended it ever since Varen marched off to war.

He is entwined in a power struggle with Primate Artorius and his Order of the Hour. He is also at odds with Governor Fortunata ap Dugal. He has a Midnight Steed named Triumph.

During A Special Request, audible through the door to his suite:

Carolus: "Sweet Mother, sweet Mother, send your child unto me, for the sins of the unworthy must be baptized in blood and fear..."

When approached inside his suite:

Carolus: "Did it work? Yes, it must have. I performed the ritual just as described night after night, and now you're here. I suppose there's no turning back. I have to go through with this, for the people of Kvatch. Fortunata must be stopped!"

"I have the gold required for payment, but I wanted to offer you something more. I can tell you who's been murdering your assassins."
I'm not here because of the ritual.
"You're not? Then why have you slipped past my defenses and entered my ....
Oh no. Fortunata sent you, didn't she? You're here to kill me?"
Fortunata sent me, but not to kill you. Marcus Scipio is dead. She wanted you to know.
"You murdered the Commander? I see. Another one of Fortunata's insults. Pay to weaken the Order of the Hour, but killing a Count is just a waste of gold.
But you are one of the Brotherhood. And I performed your ritual. Let me pay you to kill her!"

"I'll take your silence as agreement. I don't care how, just make sure Fortunata dies. It's the only way I can protect my city. Do that and the gold and the information about the murderer are yours. I'm a man of my word.
Wait, who's that behind you?"

When spoken to after you have taken his contact:

"I don't want to know the details. Believe me, if there was any other way ....
Just make sure the Pirate Queen dies. The fate of the Gold Coast depends on it."

When spoken to during Dark Revelations:

"I'm not used to being ordered about by a clandestine organization, so let's get this over with. I'd prefer to conclude our business and forget all about that dreadful ritual I had to perform."
It's time to pay what you owe. Tell me about the Black Dragon.
"I already told your associate everything I know. The woman with the dark hair and the staff. Mirabelle, I think she said her name was. Do I really need to repeat myself to every assassin that slips out of the shadows?"

"If that's supposed to frighten me, it's working.
The Black Dragon is the First Sword of the Order of the Hour. They're using the old Enclave of the Hourglass to amass an army. Siege weapons, new recruits—it's a threat to your people and mine!"
<Remain silent.>

I need you to tell me everything, Count.(?)

"If that's everything, I'd like to get back on my horse and return to Castle Kvatch. If I'm gone too long, I suspect Primate Artorius will go ahead and change all the locks."
Count Carolus, a few more questions before you leave.
"Oh very well. What's a few more moments when I get to spend it with a deadly assassin?
What else would the Brotherhood like to know?"

Tell me more about the Enclave of the Hourglass.

"My spies watch the Order's old headquarters from this camp. Saw supply carts start arriving a few days ago.
If you want to weaken the Order, destroy their siege weapons and stop them from initiating more recruits. You'll be doing us both a favor."
Where are these new recruits coming from?
"The primate offered pardons to any Red Sails pirates who agreed to take the vows of the Order. Since Fortunata's death, they've been flocking to the Enclave.
I wish I knew what Artorius was planning to do with an army of priests and pirates."

I thought the Order of the Hour worked for you.

"Whatever gave you that idea? The Order is a company of warrior-priests dedicated to protecting the Cathedral of Akatosh. At least, that's how they started. Now, they recruit anyone who can wield a sword. I agreed to expand their authority, but ...."
You allowed militant priests to have free run of Kvatch?
"My back was against the wall. Between Anvil's aggressive overtures and the rampant increase in murders, I needed help. Primate Artorius offered the Order and I reluctantly agreed.
That was before I learned the Black Dragon was one of their number."

Is there anything else you can tell me about the Black Dragon?

"Just that the Black Dragon is one of the deadliest warriors I've ever seen. Wears armor as dark as Oblivion and twice as frightening. Even makes the rest of the Order nervous.
Right after I received the first reports about her, the murders began."
Any idea why a warrior of the Order would be murdering members of the Dark Brotherhood?
"Not a clue. We only suspected that the murder victims were members of your guild recently, so my spies never even explored that line of questioning.
No offense, but if the lot of you wound up destroying each other, I wouldn't lose any sleep over it."
<Remain silent.>
"By the Ruby Throne, stop doing that!
I've told you everything I know. The Order of the Hour has increased its numbers by offering pardons to Fortunata's pirates, and the Black Dragon can be found in the Enclave of the Hourglass. Now leave me be!"

This Online-related article is a stub. You can help by expanding it.
Retrieved from "https://en.uesp.net/w/index.php?title=Online:Count_Carolus_Aquilarios&oldid=2063104"
Categories:
Hidden categories: