Adoption of the Riddle'Thar Epiphany was not without controversy: when the priests of the Shrine of the Consummate S'rendarr in the Jodewood refused to accept the new edicts, they were exiled and the temple deconsecrated. Today it is a bandit lair. 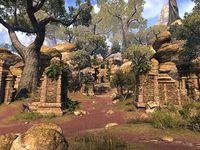 Claw's Strike is a ruined Khajiiti temple in western Reaper's March, located to the north of the Do'Krin Monastery containing Dawnmead Bandits. They are led by Fishbreath.

This delve contains a Skyshard, three copies of Skooma Runner Logs, and a Note to Marianas.

This Elder Scrolls Online-related article is a stub. You can help by expanding it.
Retrieved from "https://en.uesp.net/w/index.php?title=Online:Claw%27s_Strike&oldid=2397813"
Categories:
Hidden categories: