The UESPWiki – Your source for The Elder Scrolls since 1995
< Elder Scrolls Online: Quests: Southern Elsweyr / Side Quests
Jump to: navigation, search

I met the Twilight Cantor, Adara'hai, and her sister, Ka'ishka, in the village of Black Heights. Ka'ishka's husband, Vijari, is terminally ill and needs to perform the last rights of his faith, but something is not right at the Wall of Life.
or
A local around Black Heights told me that a Twilight Cantor recently arrived in town and believes that spells trouble for their community.

When you arrive at Black Heights, you may notice two Khajiit speaking about someone's death. Inquiring further with Adara'hai reveals that she is a Twilight Cantor, and that her sister, Ka'ishka, has called her here to perform an exorcism. Ka'ishka's mate, Vijari, has always been ill, and he's nearing the end of his life. He apparently made a trip to the Wall of Life, where the residents of Black Heights paint their mark before they pass on to the Sands Behind the Stars. Ka'ishka is worried that there is something unclean at the Wall of Life, and Adara'hai asks that you clear the way along the path to the wall so that she may investigate.

While walking along the path, it is apparent that something is off. Glowing blue portals are scattered here and there, with hoarvors and spiders spilling out of them. The Wall of Life itself is in an alarming state. If you've previously helped Adara'hai cleanse the Temple of Seven Riddles, you will know exactly what's wrong with it—the influence of the dro-m'Athra pervades the wall. It is unclean. And Vijari is in the thick of Lorkhaj's incessantly beating heart. Adara'hai sees this and knows that you need to move him immediately. Talk to him and see if he isn't too far gone. 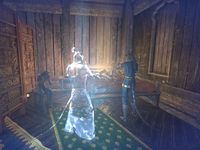 Vijari is speaking in rhymes and he can't see anything. He manages to tell you that "Khenarthi is the key". There are Khenarthic Bells on either side of the Wall of Life. Adara'hai tells you that you need to break the Heart of Lorkhaj's tempo, as it is too loud for her songs to break through the Darkness. You must do so by ringing the bells by the mural. Once you ring Khenarthi's holy bells, the Darkness will retreat. Adara'hai tells you to meet her back at Vijari's House so she can assess the situation.

When you arrive, Vijari is laying in bed while Adara'hai performs the Dusk-Canticles. Unfortunately, she can't perform the exorcism alone. She needs you to take the cantor's tonic, which is on the table by her bag. The Wall of Life isn't the true source of the corruption. Something is reaching out for Vijari, and Adara'hai can't break its hold without knowing more about the nature of the subject. The cantor's tonic will allow you to see what clings to Vijari, and follow it to whatever else it has touched on Mundus.

Drink the tonic. There is a cracked decanter on a table by the front door. When you observe it, you'll notice something happening within the house. The projection of a Khajiiti male and his ailing mate appears at the bed where Vijari is supposed to be. From their conversation, you can deduce that they are Vijari's parents. Vijari's mother is too weak to get up, and she dies before she has the chance to make her pilgrimage to the Wall of Life. The next vision is found at the fountain outside of Vijari's house and down the road to the east, and is triggered by the wishing coins within. Vijari is speaking unintelligibly, as he has fainted. His father, Dak'radhi, helps him up, obviously fearing for his safety. Some dried paint on the bridge leading towards the Colorworks triggers the next vision. Dak'radhi is praying to Khenarthi on the bridge when a voice calls out to him, claiming Khenarthi never cared about his weak wife or his sick child. It is the Shadow of Namiira, and she claims that Khenarthi has forsaken Dak'radhi and his kin. Namiira offers a safe haven in the Dark for Vijari, and claims that Dak'radhi can save his son with her aid.

Cross the bridge the rest of the way and enter the painter's warehouse by the lake. A claw-worn brush by an easel near the entrance will show you the next scene. Vijari is visiting his father while he works at the warehouse. Dak'radhi insists that Vijari should go to bed, as it's late. Vijari obeys as Dak'radhi ominously suggests that he will "not be gone forever." Head back up the road and enter the Colorworks. A darkly stained mortar triggers the final memory. Dak'radhi begins mixing paint. He and the Shadow of Namiira list off the ingredients: The blood of a flightless bird (too ugly for Khenarthi's skies), Petals, blue as the sky (for numbing dreams are as close as Dak'radhi will come to the clouds), and the skin of Khenarthi's fallen children (torn down by her own claws). When the paint is ready, Namiira orders Dak'radhi to paint his mark on the Wall of Life.

A ritual of renewal

Return to Adara'hai at Vijari's house with this new information. She has managed to wrest Vijari back from the Darkness, but whatever pulls him from behind the mural won't let go. Adara'hai seems taken aback when you mention that Dak'radhi is behind this. It doesn't matter that Namiira took advantage of his fear and grief; the fact of the matter is that Dak'radhi is a Bent Cat who doesn't know that he's corrupt. This makes him exceptionally dangerous. If Dak'radhi's sole desire is his son, that connection is far too strong for Adara'hai to break. You'll need to seal the cracks in the Wall of Life that allow the Darkness to seep through. When you tell her about Dak'radhi's paint ingredients, she notes that they sound more like reagents for a ritual than ingredients for paint. Adara'hai needs you to bring her these ingredients, and tells you to ask Ka'ishka and her husband more about them. If Dak'radhi mixed his paint with ingredients he could find nearby, Ka'ishka and Vijari may be able to tell you where to find these things, as they know the area around Black Heights better than Adara'hai does.

Ka'ishka seems troubled when you tell her of the ingredients, but she notes that terror birds stalk outside the village when asked about the blood of a flightless bird. Vijari tells you about the petals and the skin. Vijari takes medicine made from blue poppies for his pain, which gives him strange dreams. On the skin of Khenarthi's fallen children, Vijari points you in the direction of the white sycamore tree, which is sacred to Khenarthi. White sycamore bark makes the purest white paint.

You can find terror birds in the wild along the path leading towards Black Heights from the south. Kill a few and collect some Terror Bird Blood. Blue poppies can be found in the grass around Khenarthi's Breath Temple. Gather some Blue Poppy Petals for Adara'hai. For white sycamore bark, you need to cross the bridge near the Black Heights Wayshrine and move past the Dragonscour to a cliff overlooking the lake at Black Heights. Trees thrive on the lonely cliff, and you can harvest White Sycamore Bark there without issues.

Ring the bells to light the way

Bring the ingredients to Adara'hai at the Colorworks. You'll notice Ka'ishka and Vijari are here, too. Since Dak'radhi poured all of his hate and anguish into his art when he defiled the Wall of Life, Vijari needs to paint with love and peace when makes his mark on the wall to restore the mural. Adara'hai will consecrate Vijari's paint as he and Ka'ishka mix it. Ka'ishka will light Vijari's path, and Adara'hai's prayers to Azurah will lend Vijari's paint the power to drive back Namiira's Darkness. She informs you that you don't have a lot of time, as Vijari's health is failing him.

Your job now is to walk the path to the Wall of Life and clear the way for Adara'hai and company to come to the wall. When the way is clear, ring one of the Khenarthic Bells at the wall to signal that it is safe for Vijari to arrive. Ka'ishka is horrified by the state the Wall of Life is in, and Vijari assures her that they can make it whole together. This is where the real work begins. While Vijari works on restoring the Wall of Life, you and Adara'hai need to walk the Passage of Dad'na Ghaten and exorcise Dak'radhi from the Mundus. The Passage of Dad'na Ghaten is where the Khajiit of Black Heights go after they've painted their mark on the wall. Along the way, they ring the bells to inform Khenarthi of their passing. You may very well have to ring these bells if the Passage is corrupted like the wall is.

The Wall of Life made whole

Enter the Passage of Dad'na Ghaten through the overgrowth to the right of the Wall of Life. Just as Adara'hai feared, the Passage is corrupted by the Great Darkness. You'll need to cut a path through the dro-m'Athra and ring the Khenarthic Bells along the passage to cleanse the area. The first bell is up the hill just outside of the entrance cave. The second bell is further along the path. Dak'radhi is near the end of the passage, and you will need to subdue him as Adara'hai performs her exorcism. Song alone is not enough to purge him from this world.

Upon Dak'radhi's defeat, his spirit emerges, and Adara'hai binds him. Suddenly, Vijari appears, as he was able to walk the passage safely with the help of your bell ringing. Dak'radhi begs Vijari to join him in the Dark Behind the World, but Vijari refuses. He doesn't fear death like his father does, and admonishes his father for going down this path. Adara'hai encourages you to strike the Advent Bell at the end of the Passage to finally purge Dak'radhi's spirit from Black Heights, despite his protests. When the bell is struck, Dak'radhi disappears, and Adara'hai exits the passage, as you need to make sure the corruption has been cleansed from the Wall of Life before coming to any conclusions.

The Wall is restored, and Vijari would like to speak with you in his final moments. He thanks you for all you've done before finally passing on. Speak with Adara'hai after he's gone. She will thank you again for your help here.