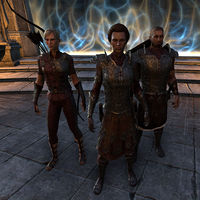 Captain Josajeh and her troop

Captain Josajeh is a version of the Redguard Psijic mage Josajeh from an alternate existence where she became a captain in the Imperial Legion, guarding the emperor's throne room in the White-Gold Tower. She is accompanied by an Imperial Bodyguard and an Imperial Marksman.

She will yell "An intruder is in the emperor's sanctum? To me! Slay the invaders!" when first attacking.

This Online-related article is a stub. You can help by expanding it.
Retrieved from "https://en.uesp.net/w/index.php?title=Online:Captain_Josajeh&oldid=2013695"
Categories:
Hidden categories: