Cadwell the Betrayer is the person that the Soul-Shriven Sir Cadwell of Codswallop was in life—a hero who helped Khunzar-ri and his kra'jun seal the dragons away in the Halls of Colossus only to betray him in an attempt to take the power sealed away in the Plane of Jode. He died during his last stand in the Shadow Dance Temple during the Merethic Era, with his remains scattered across the land and his name wiped from all records.

Euraxia Tharn's chief necromancer, Zumog Phoom, resurrected the disgraced Nedic knight to serve as his familiar and confidant, although initially only as a floating head. Phoom sent Lieutenant Lepida to Desert Winds Adeptorium to find where the rest of the Betrayer's body parts were buried. 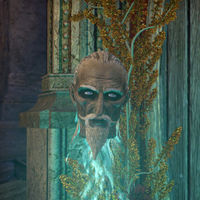 "When I am made whole, the cats will pay for what they did to me."

After you arrive in the Rimmen Palace to parley with Euraxia Tharn, you will be stopped by Zumog Phoom who is accompanied by his familiar.

Zumog Phoom: "Ah, here come Queen Euraxia's guests now."
Cadwell the Betrayer: "I don't like the looks of these meddlers. I say we feed them to the Dragons and be done with it."

Said familiar is the disembodied head of the Betrayer, and he will reveal that he saw you from Cadwell's eyes.

"I know you. I saw you through the Soul Shriven's eyes. You were with the fool who thinks himself the shining knight of Cyrod.
If only he knew what a monster I was. The horrors of Coldharbour pale before my heinous deeds!"
You're Cadwell's head?
"I am my own head, yes.
I am the hero of Cyrod and the villain of Elsweyr. The champion of the Third Nedic Massacre and the dark knight they call the Betrayer."
You aren't the Cadwell I know.
"Of course not. I am the genuine article, much more real than a disembodied soul given shape in the flesh-cauldrons of Oblivion.
But why do you presume to talk to me? I have killed greater beings than you for much, much less."
You're the Betrayer mentioned on the gravestone?
"Came to that conclusion by yourself, did you? That's what they called me. Has a certain ring to it, but I always preferred my more grandiose titles. Champion. Slayer. Dark Knight.
When I am made whole, the cats will pay for what they did to me."

After you have spoken with Zumog Phoom, Cadwell will speak up again.

If you speak with him again, Cadwell will have a request.

"If Queen Euraxia has you beheaded, do you mind if I lay claim to your body? It's not quite up to my usual standards, but any dagger in the spleen, wouldn't you agree?"

As you accompany Captain Nala-do and Zamarak through the Rimmen Palace, you will be trapped in the Chapel of the Guiding Moons by Zumog. Cadwell will then taunt you:

When you catch up to them in the Great Hall, you will find performing some ritual on Cadwell:

Cadwell: "Help! They're going to destroy me!"
Cadwell the Betrayer: "Destroy you? No. We're simply correcting a mistake of nature."
Zumog Phoom: "We will transfer your duplicate's animus into you, Head. But our time with Queen Euraxia has reached its end. Come along."
Cadwell: "Please … not like this …." 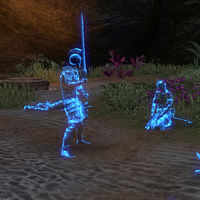 "You talk to your new god like that? Manners!"

As you and Khamira proceed through the temple, you'll witness a memory of the Betrayer's last visit to the Shadow Dance Temple:

Continue and another memory appears:

Cadwell the Betrayer : "It's almost a shame how Anequina's faithful keep throwing themselves at my blade. Almost."

Vault of the Heavenly Scourge[edit]

Enter the chamber and battle the Betrayer:

During the battle, he'll taunt:

This Online-related article is a stub. You can help by expanding it.
Retrieved from "https://en.uesp.net/w/index.php?title=Online:Cadwell_the_Betrayer_(person)&oldid=2178509"
Categories:
Hidden categories: