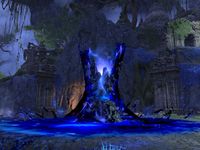 The Azureblight Cancroid is a corrupted mass located within the Lair of Maarselok. It is a large source of the Azure Blight, oozing corruption throughout the cave and speeding up the spread of the blight.

During combat, the Cancroid is invulnerable until you bring down the Azureblight Infestors it spawns. When the Infestor dies, Selene will cleanse the seed within the Infestor. One group member needs to use the synergy on the seed and bring that seed to the Cancroid in order to bring down its shield. From there, it can be attacked.

Standing in the deep blue aura surrounding the Cancroid will slow and harm you.

This Online-related article is a stub. You can help by expanding it.
Retrieved from "https://en.uesp.net/w/index.php?title=Online:Azureblight_Cancroid&oldid=2003072"
Categories:
Hidden categories: