The UESPWiki – Your source for The Elder Scrolls since 1995
< Elder Scrolls Online: Places: Cyrodiil / Battlegrounds
Jump to: navigation, search

When the new Mages Guild needed a headquarters, they took over an older Ayleid district adjacent to Imperial City and rebuilt its interior as the Arcane University. Though the Worm Cult had taken it over, it was still badly damaged by Molag Bal's attack during the Planemeld. 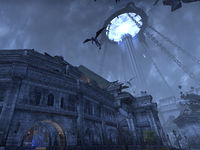 The Arcane University with the White-Gold Tower behind.

The Arcane University is a walled compound connected to the Imperial City that was formerly one of Tamriel's most prominent centers of magical learning, which now serves as a battleground. 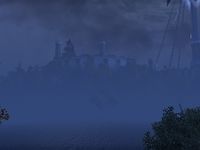 Exterior of the Arcane University (left), seen in Cyrodiil

Following the Soulburst, the Mages Guild was stripped of its stewardship of the Arcane University and was instead awarded to Mannimarco's Order of the Black Worm under the name of the "Fellowship of Anchorites". Shortly after the Daedra invaded, they ransacked and destroyed it. Today it lies in ruins, a mere shell of its former glory. The University is slightly larger than the three original Battlegrounds maps, and it brings dangerous urban-based close combat via crumbling buildings and other line-of-sight breakers in tandem with heavy vertical elements.

When inside the university itself, you can use stairs to climb up to the building's middle level and a series of portals to teleport to the upper level. This will allow you to ambush the enemy teams below and move safely from one side of the map to the other. For the majority of the match, the portals can be found with a glowing blue light, but at certain random intervals, they will glow red instead. If you use a red portal, you'll receive the “Mark of the Worm," and your character will explode after a short period of time, causing massive damage in a large radius. This damage will hurt you and your teammates, but it will also harm nearby enemies, making this environmental hazard both a danger and an opportunity.

This Elder Scrolls Online-related article is a stub. You can help by expanding it.
Retrieved from "https://en.uesp.net/w/index.php?title=Online:Arcane_University&oldid=2093153"
Categories:
Hidden categories: