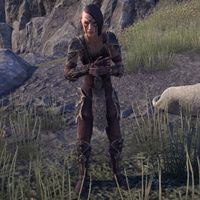 Apprentice Orla is a Reachman priest and hunter who can be found at Lost Valley Redoubt accompanied by her wolf pet Keeva. At the end of the related quest, she relocates to the Shrine of the Hunt-Father in Markarth. She is one of High Shaman Glynroch's apprentices.

Apprentice Orla: "Easy girl. I told you Hircine would send us a sign."

When you first meet her:

"If you planned to harm me, the jaws of my wolf would already be around your throat. I guess that means you aren't an enemy.
So, what are you doing out here, wanderer?"
When you didn't return, High Shaman Glynroch sent me to find you.
"This mission … there were problems at every turn. Hircine definitely tested me on this hunt. I almost died trying to retrieve the Symbol of Uricanbeg. In order to establish a new shrine in Markarth, we need to earn it.
Will you help me, wanderer?"
I'll retrieve the Symbol of Uricanbeg. Where can I find it?
"The old tower at the top of the rise. It's the lair of a powerful minotaur. Look for a drum of bound skin and wood in its hoard.
If you find it, take it to the high shaman in Markarth. I'm in no condition to help, so I'll make my own way back."

You can ask her more questions at this point.

The Symbol of Uricanbeg is a drum?
"Aye. What better than a drum to represent Uricanbeg, the Great Stag?
Uricanbeg is one of the mightiest aspects of Lord Hircine, whose beating hooves, like the beating of a drum, sound the Blood Summons, which calls prey for us to hunt."
Why do you think Hircine is testing you?
"It's in his nature. Establishing a new shrine is no small undertaking. Hircine will embrace it in the end, but not before he tests us. Makes us prove our worth.
This is a hunt of a different sort. But with your help, I think we will succeed."

Hircine doesn't care if I help you?
"Of course he cares! But while a lone wolf can be a noble hunter, few can survive for long without a pack.
There's no dishonor in asking for or receiving aid, but there's plenty of honor in a successful hunt. All that matters is we succeed."

Are you sure you can make it back to Markarth on your own?
"I've recovered from worse injuries on a hunt. Keeva will watch over me, as will the Hunt-Father. I believe he meant for us to find the symbol, but for you to retrieve it.
We will meet again at the shrine when you return. Do not fear."

If you talk to her again before retrieving the Symbol of Uricanbeg:

"Hircine demands we hunt to survive, but he doesn't demand we do it alone. I'm grateful the high shaman sent you to help.
Find the Symbol of Uricanbeg at the old tower on the rise. But beware of the minotaur. It's a mighty hunter in its own right."

When you return to the shrine, High Shaman Glynroch will be praying.

High Shaman Glynroch: "Hunt-Father, I beseech you, guide the wanderer swiftly back to us."
Apprentice Orla: "Master, look! Your prayer has been answered!"

You can talk to Apprentice Orla now:

"I knew Hircine smiled upon you. Keeva can discern the good from bad, and she's been happy ever since we crossed paths.
Go on. Give the sacred relic to the high shaman. It's the last thing we need to dedicate and complete this shrine."

After completing the quest, you will hear the shaman and his apprentice chanting:

Afterwards you can talk to Apprentice Orla:

"You may not have chosen him, but obviously Hircine has chosen you. You know this, deep inside.
Where your hunt takes you next, I do not know. But you can always rest here when you need a respite from the chase."