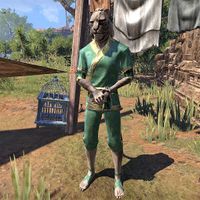 Aneshi the Shrine Keeper is a Khajiit scholar who maintains the shrine to Khunzar-ri found near the Rimmen Necropolis. He previously was the castellan for the Rimmen Palace and was an old teacher of Khamira.

Arrive at Aneshi's location near the Rimmen Necropolis and Khamira will meet you there:

Khamira: "Five-claw! I decided to join you. Aneshi deserves to hear that I still live in my own words."
Aneshi the Shrine Keeper: "Welcome to Aneshi's humble shrine to Khunzar-ri. Here, we remember the tales of the hero of ancient Elsweyr."

Speak to him and he'll say:

"Old Aneshi doesn't get many visitors, friend. Few find much comfort in the ancient tales of Khunzar-ri during these trying times.
Wait. Aneshi recognizes your friend! She is grown now, more serious, but this one knows Princess Khamira, by Jode!"
She's Queen Khamira now, and she remembers you, too. We need your help.
"Aneshi's beloved wife, Zaima, worked with the militia for a time after we avoided Euraxia's purge of the palace. Passed along information until the Euraxians caught her. They killed her in the palace courtyard.
If Aneshi can help, he will do so."
We're going to assault Rimmen Palace, but we need a way to slip inside without being spotted.
"Then you need to enter the palace crypts. A forgotten passage in the crypts leads to the royal kitchens.
Aneshi will write down directions to where he hid his master key. The key opens a door in the sewer under the palace that leads to the crypts."
I'll take the directions and go find your master key.

You can talk with him again before you leave:

"The hero Khunzar-ri was enamored of moon-sugar pies. He loved them! Even defeated the giant Drol by eating four-hundred-and-one in a single sitting! Or was it four-hundred-and-two? The Moon-Singers don't all agree, you see."
Why did you decide to become the keeper of this shrine?
"Aneshi has always been a custodian of one ancient site or another. Once it was the Rimmen Palace, now it is this unassuming shrine. After Euraxia had my beloved Zaima killed, this one sought peace.
Aneshi found it here."
Why dedicate this shrine to Khunzar-ri?

"Khunzar-ri's tales not only entertain, they provide valuable lessons that resonate even in the current day.
Did you know this ancient site has long been associated with the sleek hero? This was where he acquired Bruk'ra's never-empty coin purse."
Acquired?
"Acquired, stole … tomato, tomahto. It happened here. Although some texts put this as the place where he first bedded fair Anequina. The two events share certain commonalities.
Pilgrims, Moon-Singers, traders … many visit this humble shrine."

After Euraxia conquered Rimmen, why didn't you become a spy like your wife Zaima?

"Zaima was fiery and brave. All sharp claws and clever wits. Skills that this one has never possessed. She hid her anger and watched the Euraxians.
When Zaima was captured and executed, Aneshi fled. This one was … afraid."
So you became the keeper of this shrine?
"It wasn't a shrine then. Just tumbled walls and crumbling ruins. Aneshi has worked hard to preserve the site. Restore it to its former glory. This one still has much work to do in that regard.
But seeing the princess again, it makes Aneshi proud."

Once you find the key, you can return to the shrine and speak to him again before heading to Rimmen.

"You found it, didn't you? Right where Aneshi indicated? Good, good!
This one wishes he was a hero like Khunzar-ri. Then he would accompany you to overthrow the Usurper Queen. But alas, Aneshi is not. Aneshi is just a frail, old caretaker, by Jode!"
What happened to Khamira?

"Queen Khamira visited for a while. We spoke of the old king, my wife, life in the palace …. Then she left for Rimmen. Said she had a tyrant to dethrone. This one is so proud!
Most Imperials Aneshi meets are reasonable. But Euraxians, not so much."

"These are ex-Imperial soldiers among the Usurper Queen's forces, but the bulk of her troops consist of hired Nibenese mercenaries. Many of the Cyrodilics who lived and worked in Rimmen since before Euraxia's arrival find her as awful as we do."
Then why don't these Imperials do something?
"Because Euraxia's loyal soldiers follow her orders without hesitation. They have no problem dealing with anyone who speaks out against her—whether they are Imperial, Khajiit, or something else entirely.
Dark Moons, this is bad business, walker."

If you visit him again after the quest, he will readily welcome you:

"Welcome to this shrine, walker. It is dedicated to the ancient Khajiit hero, Khunzar-ri. If you are interested, this one recites the most popular tales of the hero on the first Morndas of every month.
Next time it will be Khunzar-ri and the Dagi!"

This Elder Scrolls Online-related article is a stub. You can help by expanding it.
Retrieved from "https://en.uesp.net/w/index.php?title=Online:Aneshi_the_Shrine_Keeper&oldid=2497714"
Categories:
Hidden categories: