For the Khajiit, Mafala is the Clan Mother of Dark Secrets, the recorder of hidden guilt and eternal shame. This fallen temple was once the center of her worship, before the Sinner Suicides brought her cult into disfavor. Now it hosts ...others. 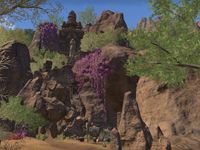 Abode of Ignominy is a delve in the northern part of Northern Elsweyr. It is found east of Starlight Adeptorium and west of Riverhold. There is a cooking fire at the camp in front of the delve.

Explore and clear the Abode of Ignominy.

This Elder Scrolls Online-related article is a stub. You can help by expanding it.
Retrieved from "https://en.uesp.net/w/index.php?title=Online:Abode_of_Ignominy&oldid=2295149"
Categories:
Hidden categories: