The UESPWiki – Your source for The Elder Scrolls since 1995
< Elder Scrolls Online: Quests: Southern Elsweyr / Side Quests
Jump to: navigation, search

A good-hearted scoundrel named Daini wants to rob local bandits of their ill-gotten goods. She means to use their wealth to leave Elsweyr with her brother, but seems intent on settling scores before she departs.
or
A wagon caravan suffered an attack on the road. The wreckage likely contains valuables—treasures that might draw the eye of someone trying to get ahead in crime-ridden South Guard.

While traveling the road west of South Guard Ruins, you may come across a Khajiit named Daini. She's standing over the remains of a wrecked caravan, beset upon by terror birds. She admits that she wrecked the caravan, and asks you to help her salvage valuables from the wreck. You need to loot two Cargo Crates and a Cargo Barrel. Within the wreckage, you'll find Ruined Anequine Spices, Bolts of Shredded Silk, Broken Wine Bottles and Turo's Cargo Manifest. Return to Daini with the goods. She is speaking to a panicked woman named Antonia Matias, whom Daini reveals is an acquaintance who wanted to escape South Guard with her. She must have gotten cold feet, because she ran off to tell someone named Turo about the wreck, which involved his caravan.

Daini explains that her plan might be muddied a little bit. She wants you to head east into the ruins and find her shelter. There, she would like you to speak with Safik, her brother. Head over to Daini's shelter, which is beneath a ruined house. 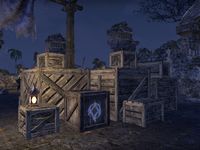 There, you will find Safik, Malahbu, Galeneth, and a Nord captain named Sormund. Malahbu and Galeneth are Safik and Daini's friends. Together, they're all trying to escape South Guard. Sormund is the smuggler Daini is trying to pay for passage out of South Guard. Speak with Safik, who knows exactly what Daini's gotten herself into. Shortly afterwards, Daini arrives. Speak with her, because she's got another plan.

Daini wants to rob Turo's warehouse, which is down the road and north of the shelter. It used to belong to her father. All Daini knows about it now is that Turo stores valuable things there. Meet Daini by the warehouse. She tells you that you need to search the marked crates. Turo marks his personal goods so that his goons don't go around skimming his profits. If they tamper with the crates, Turo will know. You'll find Stolen Ceramics, Stolen Books and Torval Brandy in the marked crates outside. Daini still isn't sure that what you've found is appropriate to pay Sormund with. The cellar, however, might have more goods. Enter the cellar and loot the final crate. Upon taking the Pouch of Jewels within, Daini hears footsteps. Hide in the empty crate you just looted. In walks Turo and Antonia, who are talking about what Daini did to the caravan. Turo thanks Antonia for the information, then kills her before leaving the cellar. Exit the crate and hurry back to the shelter. If Turo knows about the caravan incident, he might try to hurt Safik.

Rescue Daini and her friends

When you arrive back at the shelter, everyone is gone, and a letter has been left by the camp fire. It's a ransom note from Turo. He says that her friends have been captured and are waiting to be sold into slavery. Turo also threatens to hang Safik if Daini doesn't turn herself in. Daini decides to cave to Turo's demands in order to distract him while you free the others. Sormund is located inside of a ruined house along the coast, south of the shelter. He tells you that Malahbu was probably taken to the caves near Turo's docked slaving vessel, the Dream-Drowner. Head east along the coast and enter the cave. Malahbu is in a cage. Free him, and he informs you that Galeneth was taken kicking and screaming to the slavers' ship. Head out of the cave the way you came and cross the docks to board the vessel. Galeneth is located to the west, in a cage at the front of the ship.

With everyone else rescued, head over to Turo's fortress to rescue Daini and Safik. Head east along the beach until you reach tiles. Behind the gated wall lies the fortress. Climb up the stairs inside the fortress, make a left turn, then a right, and you'll come across Turo on his throne, being pampered by his slaves. Kill Turo, then get to looking for his captives. Turo locked Daini and Safik in the Secret Cellar around the corner to the right of the entrance to Turo's lair. Free Daini from her bonds, and turn the portcullis to open the gate that leads outside. You will use Turo's boat to escape the fortress before his thugs come looking for you down here. Upon your escape, you'll end up on the beach, where you must speak with Daini for your reward.