The UESPWiki – Your source for The Elder Scrolls since 1995
< Mod / Oblivion: Oblivion Mod: Modding(Redirected from Oblivion Mod:Tes4View)
Jump to: navigation, search

Tes4View downloads as a single binary (an .EXE file), but this single binary can operate in two alternate modes: Tes4Edit (for general editing) and Tes4Trans (for translating mods).

By default TES4View will choose your active mods. You can click to add/remove mods on startup. There is also a context menu on the list (and all other lists displayed in this type of dialog) which allows you to select all, select none or invert your selection. If you have any modules selected which depend on masters that are available but not selected then these masters will be implicitly selected and loaded after you close the dialog.

Command Line Parameter: Another option for loading specific mods in TES4View is by creating a text file that lists the filenames of the modules you want to load and call TES4View with that filename as parameter. An easy way to do this is:

You can create as many such files as you wish. After going through the "Windows cannot open this file:" dialog once opening any .tes4modules file will always start TES4View directly.

Wrye Bash: You can also use Wrye Bash in a couple of ways to select your active mods:

A much more comprehensive discussion of cleaning mods with TES4Edit can be found here.

This process can help to reduce unnecessary conflicts among different mods. It won't eliminate all conflicts, only those caused by unintentional edits.

To do this, first make a backup of the plugin you want to clean.

In order to properly clean a mod using TES4Edit, load ONLY that mod into the program. The reason you only load one mod at a time: having multiple mods loaded reduces the number of identical to master records that are detected as actual duplicates. Though the process for spotting conflicts is the same filter as that used to clean an individual mod.

Next, right-click on the ESP and select "add filter". On the screen that comes up, you'll have a whole mess of checkboxes. There's one labeled "Conflict status inherited by parent" and that's the ONLY one that should be checked, other than the ones sitting inside the grey boxes with light borders around them. Your screen should look like this: 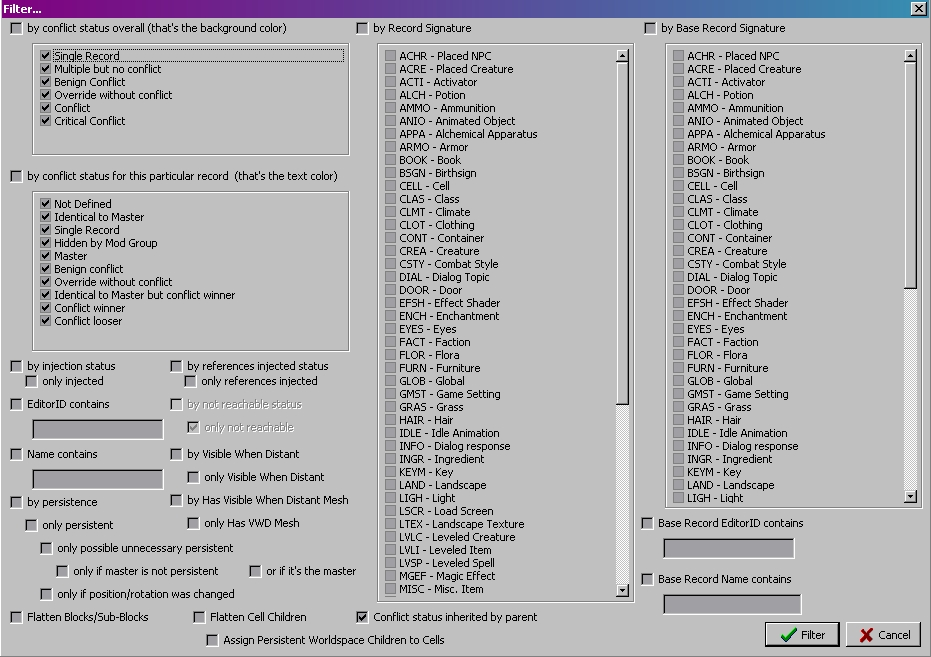 Allow the filter to process. The larger the mod, the longer it'll take. Once that's done, then right click and select "Remove identical to master records" and you'll get some output in the message tab showing you exactly what it removed.

In version 2.1.2 of TES4Edit and above, an additional cleaning step is available for deleted vanilla references. Once you've cleaned the duplicate records, right click the mod file again, select "Undelete and Disable References". You'll get another list of things that have been undeleted and disabled. This will help prevent one major cause of the game crashing when exiting. More details on this bug here.

Don't be alarmed at how much it finds. Most mods need this sort of cleaning and it would be ideal if everyone who released mods did this cleaning before doing so.

However, it's generally not a good idea to clean most overhaul mods this way. Also, do not try to clean any ESP that has other ESPs as masters (such as patch mods) since this often less than desirable results. It's much better to prune these mods manually if they need it.

After cleaning any mod, you should compare your cleaned version against the original to be sure the process only removed unimportant things. The next section covers how to do this comparison so you can repair any problems created by the automatic cleaning process.

There are additional tutorials about mod cleaning here and here.

Compare Two Versions of a Mod[edit]

Note that this is superior to loading both versions in the usual way, since when using the "Compare to" command will load the tweaked with the same Load Order ID as the original version. This makes it possible to directly compare records which are newly introduced in both the original and the tweaked version.

Another good strategy, especially if you've been cleaning/removing stuff from your changed version, is to load TES4Edit with the changed version and then do the "Compare to" against the original. The advantage here is that you can use "Copy as Override into" to restore records that have been deleted from the changed version.

In Tes4Edit, right-click on the filename of the tweaked version in the treeview on the left and select "Clean Masters". This will remove all masters listed in the file header which are not referenced (either by definition of an overriden record or by any record containing a reference to any record defined in the master) in this file. You can check that by having a look at the File Header of the file under "Master Files". If the original master has been removed by "Clean Masters" you've done everything right. If not then you've still got references to that master somewhere in the tweaked file.

Note however that it may be preferable to do this with Tes4Gecko's "Edit Master List" command to remove a master since it will tell you which records are blocking removal of a given master and give you the option to remove that record.