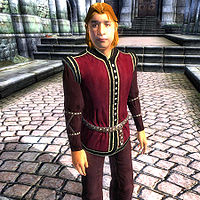 Vontan Sintav, an Imperial commoner, is one of four nephews of Iniel Sintav living in the Elven Gardens District of the Imperial City. Vontan lives with his two brothers, Beran and Kastus, in a fashionable house provided to them by Uncle Iniel. The fourth brother, Cyronin, has had a dispute with Helvo Atius, who lives in the Imperial City's Talos Plaza District, that has caused bad blood between the Sintav and Atius clans.

Vontan lives a fairly simple life, spending much time in the nice new house his uncle bought for his brothers and him. He wakes up at 6am and will wander around in the house for the next four hours. At 10am on Morndas through Fredas (see bugs), he will leave the house and stroll around the Elven Gardens District for the next 7 hours. At 5pm, he will head back to the house and wander about until his two hour dinner at 6pm. He will then spend the rest of the night wandering around until his bedtime at midnight. On Loredas, Vontan won't do much of anything, waking up at the usual time and then wandering around all day long inside the house until having his two hour dinner at 6pm. After finishing this, he will wander about even more until his usual bedtime at midnight. On Sundas, he will wake up at the usual time and wander around the house until 9am, at which point he will head to Uncle Iniel's house for the Sintav family's weekly gathering. At 11am, he will follow Iniel and the rest of his siblings to the King and Queen Tavern to watch Iniel eat his lunch. At 1pm, he and his siblings will follow Iniel back to his house and will stay there for the next 8 hours, missing his dinner. At 9pm, he will head back home and wander about for the rest of the night until going to bed at the usual time. The last exception to his schedule is during Light the Dragonfires, when he will be confined to his house under martial law like the rest of the citizens of the Imperial City.

Vontan wears a set of middle class clothing: a burgundy linen shirt, burgundy linens and a pair of thick cowhide shoes. He carries his house key and some gold.

When approchaed for the first time, Vontan will proudly greet you: "I'm Vontan Sintav. Kastus, Beran, and me got this house from Uncle Iniel. Nice, huh?" When asked about the Imperial City, he will add: "I'm a Sintav, and we Sintavs stick together. Uncle Iniel got us swell jobs and a house. It's a family thing."