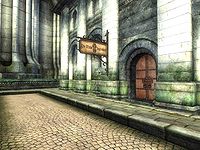 The Main Ingredient is an alchemy store located in the Imperial City's Market District. It is found close to the Gate to the Arena District, next to A Fighting Chance.

The proprietor, Ogier Georick, has 800 gold and a Mercantile skill of 40. When bartering, he will buy and sell potions, alchemical equipment and ingredients. His wares include the unique hood Mantle of the Woodsman, which drains your Strength and Endurance while fortifying your Speed and Alchemy. Note that your Mercantile must be over 50, as without the Journeyman-level perk Ogier does not sell clothing. 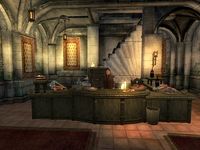 The main trading room is on the ground floor and consists of a large counter and a few tables with a wealth of various alchemic ingredients and apparatus on display. The room is spacious and simply arranged, with carpets decorating the floor and walls. The windows are all uncovered, leaving the room with a more natural lighting than the other magical shops in the district. The front door opens to the sight of three available chairs for waiting customers and, against the northern wall, a small dining arrangement with two bottles of cheap wine, an apple and a cheese wedge.

On the exhibition table in the northeastern corner are several of Ogier's wares on display: three samples of tobacco, two mandrake roots, two clouded funnel caps, two leeks, one elf cup cap, a pumpkin and a bottle of mead. Also on display are two copies of Galerion The Mystic and a novice retort and a calcinator. At the foot of the stairs leading to the private quarters are two barrels filled with ingredients as well as Ogier's merchant's chest, which cannot be opened by any key in the game.

The large counter also functions as an exhibition table and displays a wide array of rare ingredients. Starting from the main entrance, a small podium displays two copies of Fundaments of Alchemy with a novice calcinator sitting on top. In front of the podium are three mortars & pestles and a novice alembic. The nearby basket holds six rare samples of cinnabar polypore yellow cap. Next up are a novice retort and a copy of A Less Rude Song, followed by another basket with two samples of clouded funnel cap and one elf cup cap. Next to the lit candles are three mandrake roots and, in another basket, four samples of fly amanita cap. 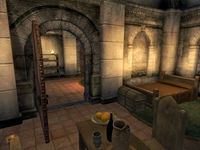 Ogier lives upstairs, as is usual with Imperial City houses and stores. His private quarters consist of an antechamber with a dining table, and a second room with a bed and a working table. The door opens to the sight of a small dining arrangement with a bottle of Tamika's West Weald Wine and three apples and a cheese wedge. In the opposite corner, a well-dressed dinner table holds even more food: two slices of ham, two loaves of bread and two pears. In the alcove, three barrels and a sack with clutter and an unlocked chest with leveled equipment.

Behind the wooden door, opposite Ogier's bed, is a cupboard with clutter and at the foot of the bed is an unlocked chest with assorted silverware, gold or arrows. The table in front of the door seats two and holds an expensive bottle of Surilie Brothers Vintage 399 and three pears. The nearby shelves hold a copy of Biography of Barenziah, v 1 and a lectern with clutter. The desk in the corner holds clutter and the occasional book, while two letters, one romantic and one heart-broken, sit on top.

There are five safe containers: two chests, two sacks and the lectern. 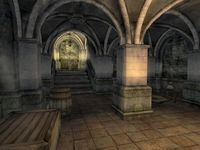 The landing in the middle of the stairs holds two locked cupboards with ingredients. In the basement area, along the eastern wall, are two sacks with clutter and a barrel with ingredients. Behind them is a crate with more clutter, and, leaning against the pillar, a sack with clothing. The northeastern corner contains a barrel with ingredients, a crate with clothing and an untied sack with food. In the next corner, past the clutter chest and crate, is an exit leading to the Market District Sewers. In the next corner are another chest and a sack with clutter, and next to it sits a repair hammer. The last barrel holds ingredients.

There are five sacks you can use as safe containers.