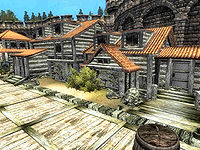 The Fo'c's'le is an inn located on Anvil's waterfront. It is found by the ship, The Sea Tub Clarabella and next to the Harborside Warehouse.

The publican, Mirabelle Monet, isn't available for any bartering service and only rents rooms to sailors. However, she does offer advanced Sneak training. The main reception area is on the ground floor while the rooms are upstairs.

Unfortunately, there is no accommodation for you here: the Fo'c's'le is reserved as "a boarding house for sailors", as Mirabelle puts it. The four rooms on the second floor are usually occupied by the lodgers. Even when they are not occupied, it is considered trespassing to enter and therefore you cannot sleep in the beds.

* Hauls-Ropes-Faster is defined as an advanced trainer but his AI packages do not allow him to offer these services.